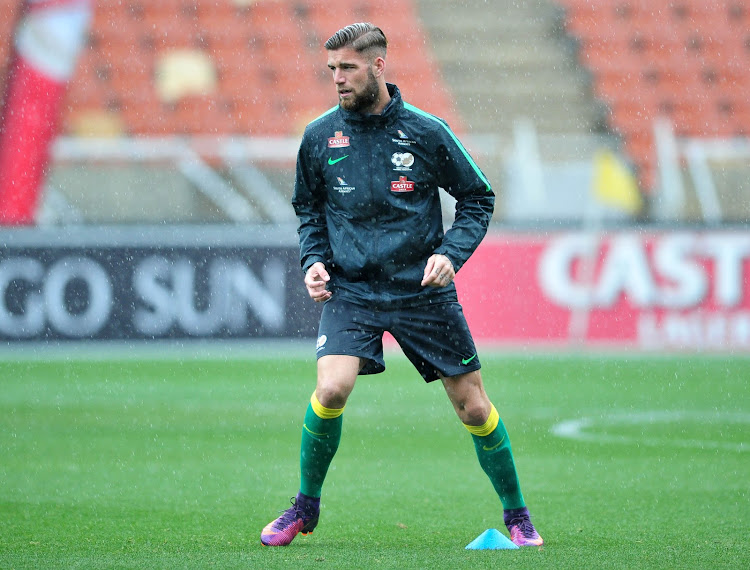 Lars Veldwijk has joined the growing list of Bafana Bafana bad boys after the FC Groningen striker allegedly refused to come on as a substitute in the Dutch club's league match against ADO Den Haag at the weekend.

The 26-year-old striker‚ who won a single cap under Shakes Mashaba‚ was kicked out of the first team squad and sent to train with the juniors after his angry coach Ernest Faber claimed he refused to go on as a substitute in the goalless draw on Sunday.

It is an allegation that Veldwijk has refuted‚ saying on Twitter: “It is with surprise that I heard today that I am supposed to have refused to go in for FC Groningen.

"I was not asked to come on.

"I am willing always and every minute to play for FC Groningen when the coach calls on me to do so.”

A meeting on Monday over the incident has been followed by demotion to the club’s under-23 side for the Dutch-born striker‚ who qualified to play for South Africa because his father was born in this country.

Television pictures show Faber calling Veldwijk over to come on during the match but then the forward went and sat back down on the bench after an extensive warm-up.

Instead Faber brought on another player‚ Ajdin Hrustic‚ to the chagrin of supporters who jeered and waved white handkerchiefs.

Dutch media reports on Tuesday said Veldwijk and his coach cannot stand the sight of each other ‚ even though it was Faber who travelled to Norway last year to watch the lanky forward when he was playing at Aalesund.

Faber has accused Veldwijk of a bad attitude and poor approach to training and wanted to sell him during the January transfer window but the club‚ who lie 13th in the 18-team Dutch top flight‚ refused because they felt Veldwijk’s presence in the squad was still needed.

This incident follows on Tokelo Rantie telling his Turkish club Genclerbirligi that he was going home to see his sick grandmother and then not returning‚ eventually having his contract terminated.

Last year Thulani Serero told coach Stuart Baxter he would not play for Bafana Bafana in key World Cup qualifiers unless he was guaranteed a place in the starting line-up.

A relaxed-looking Antonio Conte strode round the Stamford Bridge pitch on Monday shaking hands and congratulated his Chelsea players on their 3-0 ...
Sport
4 years ago

Mamelodi Sundowns have sent condolences to the family of star midfielder Percy Tau after he lost his elder brother Mogau Tshehla of Polokwane City in ...
Sport
4 years ago