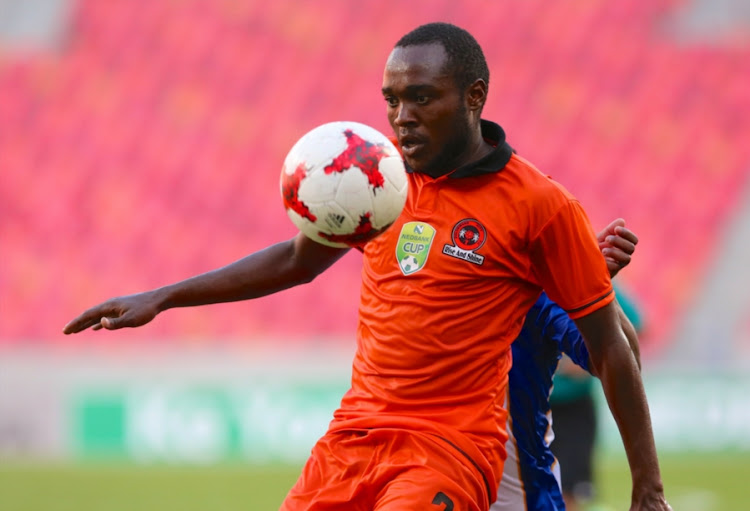 The tragic passing of Polokwane City defender Mogau Tshehla‚ the brother of Mamelodi Sundowns star Percy Tau‚ has plunged South African football into mourning and left a family of footballers grieving for their lost brother.

Tshehla was killed in a car accident on Monday‚ adding to a sad list of South African footballers to have lost their lives on the country's roads.

The 26-year-old’s death comes at a time when he was just beginning to find his feet in the Premier Soccer League after years spent in the National First Division at Witbank Spurs.

It was there that he played with his two brothers‚ current Royal Eagles defender Dumisani Tau (29 years old) and Sundowns forward Percy (23).

The trio spent the second half of the 2015/16 season together at Spurs‚ with Percy on loan from Sundowns in a move that would in many ways ignite his career and lead to his current status as arguably the hottest property in the local game.

Tshehla’s different surname reportedly comes from the fact that he was raised by his sister and her documents were used to register him.

Though all three were never on the pitch at the same time‚ they were regularly part of match day squads together in a season in which Spurs missed out on the promotion play-offs by just three points.

Born in Lydenburg ‚ Mpumalanga‚ right-back Tshehla moved to Polokwane in January 2017 and initially battled to break into the first team.

But in recent months he had found more game-time‚ and his last outting for the side was in the 3-2 Nedbank Cup Last 32 loss to Ubuntu Cape Town just last Wednesday.

City skipper Jabu Maluleke has told TimesLIVE the players have been left in shock by the loss of their teammate.

“It’s such a sad loss‚ he was a great person‚” Maluleke said.

“I don’t have the words‚ one minute you have someone with you and then they are gone forever.

“Even now‚ we are just sitting here as a team‚ we don’t know what to do. We can’t believe this has happened‚ we are all just so shocked and saddened.”

Maluleke says Tshehla shared his brothers’ traits‚ a quiet individual who was always respectful to his teammates.

“He was generally a quiet guy I would say‚ but in terms of when we sitting together as a team‚ he was talkative and would always engage with you.

"But he was certainly not a loud person always making a noise.

“When he didn’t know you he could seem quite reserved‚ but after that he would open up and there was a very humble‚ likeable person there.

"We all thought he was very good teammate to have.”

Maluleke says that Tshehla was also starting to come to grips with life in the PSL after a period of adjustment.

“He was a quality player‚ that is for sure‚ sometimes players just need to find their feet a bit when they come from the NFD.

"But I think he was going to play a big role for the club‚ he was starting games and playing well.

"He always thought a lot about the game‚ he would often come to me to discuss things and he wasn’t afraid to recognize when he had made a mistake.

“He would say to me‚ ‘I made this mistake on the field‚ what should I have done?’.

"He was always willing to take advice and always wanting to know where he could improve.

A relaxed-looking Antonio Conte strode round the Stamford Bridge pitch on Monday shaking hands and congratulated his Chelsea players on their 3-0 ...
Sport
3 years ago

Mamelodi Sundowns have sent condolences to the family of star midfielder Percy Tau after he lost his elder brother Mogau Tshehla of Polokwane City in ...
Sport
3 years ago

Manchester City playmaker Kevin De Bruyne will be a serious Ballon d'Or contender if he wins major titles with the Premier League club, according to ...
Sport
3 years ago