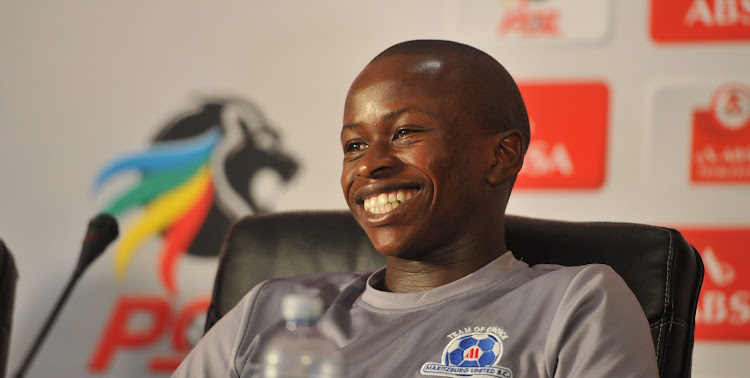 Siphesihle Ndlovu of Maritzburg United during the Player and Coach of the Month Awards on 19 February 2018 at PSL Offices.
Image: Sydney Mahlangu/BackpagePix

Fast-rising midfielder Siphesihle ‘‘Mbesuma“ Ndlovu was trust into the glare of the national media spotlight when he became the first Maritzburg United player to win the Absa premiership player of the month award on Monday.

A representative of the KwaZulu-Natal club had never ascended the winners’ podium to claim the monthly accolade and the 21-year-old Ndlovu wore the biggest smile in the room as cameras and raised cell phones flashed like lightning strikes at the Pretoria Soccer League’s (PSL) Parktown headquarters.

Ndlovu said he was shocked when he received the phone call from the PSL informing him that he had beat in-form Orlando Pirates winger Luvuyo Memela‚ Kaizer Chiefs defender Daniel Cardoso and Bidvest Wits captain Thulani Hlatshwayo to win the award for month of January.

‘‘When they phoned me I felt surprised and shocked because it is my first time (winning the award)‚” he said.

‘‘I did not think that it would happen this soon.

"As you all know the coffee did not know that it can taste nice and sweet like that if you did not mix the sugar.

‘‘So I give credit to my team-mates. It is not all about me and it about them and they are always pushing me the senior players.

‘‘So I believe the credit should be given to them.”

The judges felt that the product of United’s development structures executed his duties as a central midfielder exceptionally well and it was no surprise that he provided all the assists in the club’s 3-0 demolition of Free State Stars away from home last month.

They felt that his displays in other matches were equally brilliant and it is thanks to his contribution to he United cause that Maritzburg remains fifth on the premiership standings and just seven points behind leaders Mamelodi Sundowns.

Ndlovu is nicknamed ‘‘Mbesuma” after former Kaizer Chiefs and Orlando Pirates striker Collins Mbesuma and he gave insight into the unconventional moniker.

‘‘I used to like playing as a striker (when I was young)‚” he said.

‘‘That was when I also scored 25 goals in the junior leagues and that was when they named me Mbesuma.”