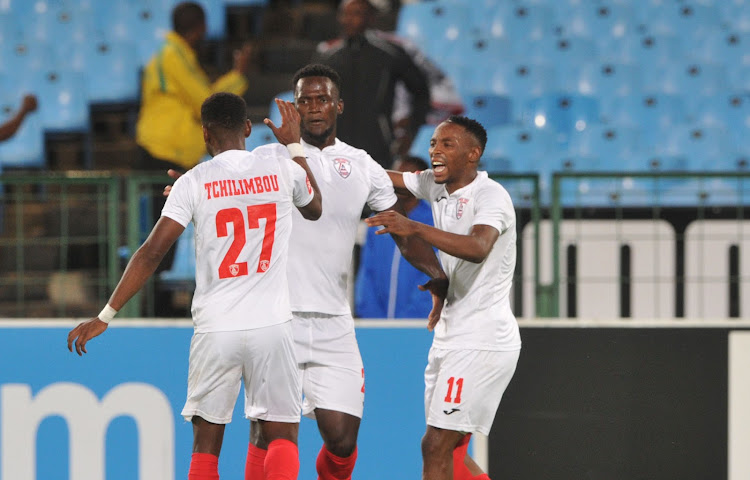 Percy Tau’s fifth minute goal gave Mamelodi Sundowns a chance to open up an emphatic lead at the top of the Absa Premiership standings but in the end the leaders held out controversially for a share of the spoils against Free State Stars in a 1-1 draw at Loftus Versfeld on Wednesday night.

Stars had a legitimate-looking penalty claim in the last minute turned down by referee Thando Ndzandzeka after Siphelele Mthembu had equalized in the 53rd minute.

Stars did the rest of the chasing pack a favour but the point means Sundowns are still five points clear at the helm of the standings.

Sundowns have won 10 games on the trot against Stars, but will consider this a fortunate draw when Dennis Onyango looked to bring down Nhlanhla Vilakazi who had broken on the counter attack with a last gasp.

It did not take Sundowns long to break the deadlock with a perfectly constructed goal, set up by the quick running of new signing Leandro Sirino, making his full debut, who laid it back for Tau to place it perfectly into the back of the net.

Uruguayan Sirino could have had the home side 2-0 up in the eighth minute with a clever turn that set up the chance for a shot but it hit it just over the top.

Jeremy Brockie went into the game still in search of a first goal for Sundowns and should have broken his duck after 28 minutes when Khama Billiat set him up but he swept the ball wide of goal.

Three minutes later Brockie’s goal-bound header was stopped by Stars goalkeeper Badara Ali Sangare with an acrobatic reflex save and there was a similar stop by the Stars’ keeper on the stroke of half-time to deny the New Zealander.

Stars had one first half chance for their new Congolese signing Harris Tchilimbou, whose diving header was stopped by Dennis Onyango but they started the second half much the better side.

There were two immediate goal chances for Mthembu, who hit the side netting and then did not anticipate a pass from Tchilimbou that set him up with an opportunity to equalise.

He also needed two efforts to score, his first shot with the right blocked but his second with the left finding the back after Tchilimbou had skinned Sundowns down the right side of the attack.

Sangare, who was named man of the match, made a fine stop to deny a rasping long range effort from Tiyani Mabunda.

But the drama kept going until the end when Sundowns were pushing for the winner only to be caught by a counter that saw Onyango fortunate to not give away a spot kick.

Wits stumble in Mauritius but squeeze through to next stage

BidVest Wits slipped to a 1-0 defeat at Mauritian side Pamplemousse in their African Champions League first round tie on Wednesday‚ but still advance ...
Sport
4 years ago

Ajax Cape Town have started a new youth development institute they are terming a “university” of the club as they look to improve the quality of the ...
Sport
4 years ago

A new Banyana Banyana coach is expected to be announced at a press conference at Safa House on Thursday morning.
Sport
4 years ago

With the club seemingly doing well these days‚ Kaizer Chiefs coach Steve Komphela was asked if his players now understand his philosophy after two ...
Sport
4 years ago

Low carb guru‚ Tim Noakes is back at the Health Professions Council of SA (HPCSA)‚ in trouble again for a tweet he posted four years ago advising a ...
Lifestyle
4 years ago