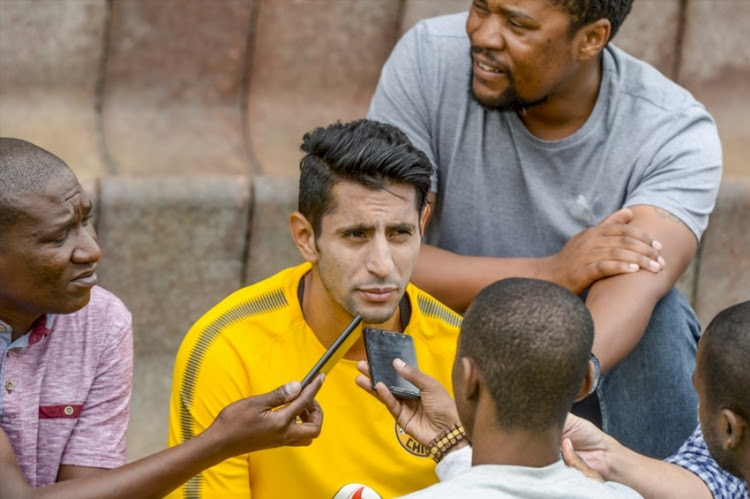 Leonardo Castro has suggested that playing together with another tall target-man‚ young Ryan Moon‚ confused him at first‚ but that overall Kaizer Chiefs coach Steve Komphela’s tactic has worked.

The Colombian striker said he has felt rejuvenated finally getting game time again after his transfer in January to Chiefs from Mamelodi Sundowns‚ where Castro had become increasingly sidelined for a year-and-a-half.

Castro has been happy to start Amakhosi’s last two games. He has said if he can gain full fitness and finish matches he will score more than his lone strike so far‚ slammed in on debut in a 2-1 win against Baroka FC.

“Now‚ I feel like I can say to myself‚ ‘Leo is back’. Because I didn’t play in the starting lineup for a long time at Mamelodi Sundowns‚” Castro said this week‚ ahead of third-placed Amakhosi’s Absa Premiership matchup against Bloemfontein Celtic at FNB Stadium on Saturday night.

De Sa: ‘All I said was you can’t have a Gomes Show every week’

“I felt like I lost my profile and my confidence in the last months at Sundowns. So now I feel better. I am working hard every day.

“My fitness is getting better. I feel like I want to finish a game. Because now‚ most of the time the opportunities and chances are coming in the last 10 minutes.

“So if I can stay longer in the game I will score two or three goals maybe.”

The problem for Castro has been the emergence‚ just as he arrived‚ of Moon from a future into a now prospect with the 21-year-old’s five goals in six league and cup games.

This has been a problem – though an unusually good one – for Chiefs coach Steve Komphela too‚ as he has had to figure out how to give headline signing Castro the game time he needs to find full sharpness.

In Chiefs’ last two games – the 3-0 Nedbank Cup win against Lamontville Golden Arrows and 1-0 league victory against Cape Town City‚ both at FNB – Komphela played both strikers‚ event though both are big target-men.

The ploy had mixed success‚ as Castro looked a little lost dropping deeper than centre-forward Moon.

A controversial stoppage time penalty from Andrea Fileccia handed Maritzburg United a dramatic 2-1 win over Platinum Stars and second place in the ...
Sport
4 years ago

“He (Komphela) told me that he wanted to put me in with Ryan‚” Castro said.

“So I said to him‚ ‘You put the same guys‚ who play the same’. But I said that to him because we are not like the fast players to run behind the defenders.

“But now‚ I think we are getting the confidence to do the things inside the field. It doesn’t matter who’s playing – it’s the style of the player.

“So if you’re doing well‚ you keep in the right position‚ and have the right mentality‚ the right things happen on the field.”

Eighth-placed Baroka have won one and drawn one since head coach Kgoloko Thobejane’s suspension and assistant MacDonald Makhubedu’s promotion to caretaker.