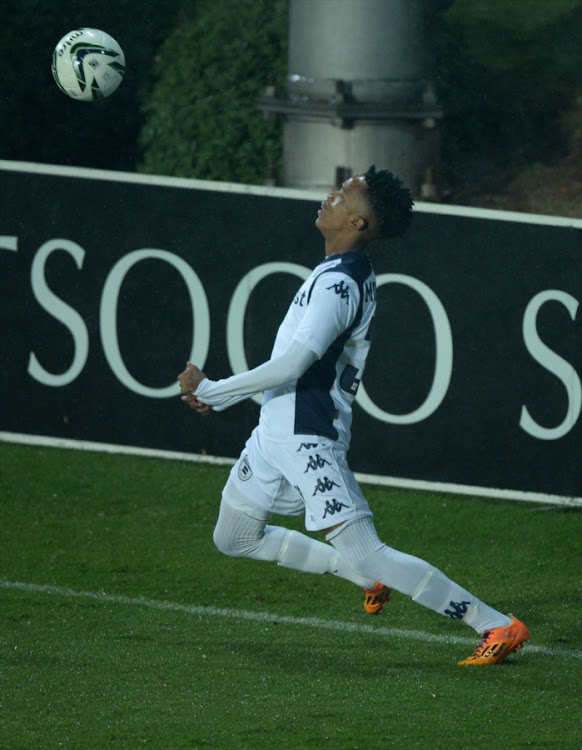 A file photo of Abednego Mosiatlhaga of Bidvest Wits keeps the ball in play during the Absa Premiership match against Chippa United at Bidvest Stadium on April 18, 2015 in Johannesburg, South Africa.
Image: Duif du Toit/Gallo Images

Gavin Hunt has hailed the potential of right wing Abednego Mosiatlhaga and has tipped him to play a role for the club in both domestic and continental football this season.

It was not all praise from the Wits boss though after he handed the 23-year-old a start in the 2-1 Absa Premiership victory over Cape Town City on Saturday night‚ also poking fun at the player's inability to find the right ball in the box at times.

Mosiatlhaga‚ who was recalled early from a loan spell at National First Division side Stellenbosch FC last month‚ did set up the first goal for Lehlohonolo Majoro with a good run and perfect pass‚ which Hunt says sums up his potential.

“He’s got a little bit of magic and hopefully he is one for the future for us‚” Hunt said.

“He’s in the Champions League squad as well and hopefully he will play in that competition‚ which will be good for him.”

Mosiatlhaga actually made his debut for Wits as a 20-year-old in the 2014/15 season‚ but after failing to nail down a first team spot in the next two seasons‚ was loaned out first to Cape Town All Stars and then Stellenbosch FC.

Hunt says the decision to recall him was in part due to injuries to a number of their wide players‚ including Elias Pelembe and Daine Klate‚ but also because he has obvious ability.

“I think he has got something we are going to need going forward.

"He played two years ago for us and maybe it was too early‚ maybe it was my fault but I like to bring the kids in early. But I think he’s got something‚” Hunt said.

“His final ball was still poor [against City]‚ he went past the fullback four times in the first half.

"When you are a right-sided player you have got to deliver better there.

“His nickname is ‘The Postman’ … he never delivers. Maybe I should call him ‘The Fireman’ because he kept putting it out!” Hunt joked.

Cape Town City winger Craig Martin was described as “unbelievable” and a “revelation” by both coaches following his performance in his side’s 2-1 ...
Sport
4 years ago

Milutin Sredejovic is refusing to make any pronouncements about Orlando Pirates’ championship chances even after the club’s 4-2 away win over Chippa ...
Sport
4 years ago