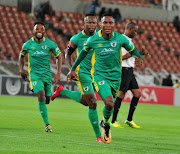 Baroka FC consolidated their position in the top eight with a hard fought 2-0 win over Cape Town City during their Absa Premiership match played at the Peter Mokaba Stadium in Polokwane on Tuesday night.

Baroka achieved this much needed victory through a brace by attacker Mpho Kgaswane who struck in each half to help his side to sixth place on the standings with 31 points after 23 matches and their first win in six matches.

For City coach Benni McCarthy, he will surely rue this missed opportunity as they are on a four match losing streak and they have dropped to sixth position on the standings with lots of work to be done in the coming weeks.

City almost got off to a dream start when a close range shot by striker Judas Moseamedi bounced off the upright in the second minute with Baroka FC goalkeeper Ayanda Dlamini beaten following a quick counter attack.

In the process, Moseamedi hurt himself after colliding with Dlamini, who moved out of his line to clear the danger but he was able to continue with the match after medical attention.

After a spell of little goalmouth action, Dlamini was again called into action just before the half hour mark and he responded with a diving save to deny Kyle Lakay’s goal bound shot as the small crowd continued to wait for the opener.

City dominated the few notable chances at this stage but it was Baroka who took the lead in the 35th minute from the thunderous boot of Kgaswane who rifled home a left footed screamer from a free kick that gave opposing goalkeeper Shu-Aib Walters no chance.

The set-piece that led to the opener came after City’s defender Kwanda Mngonyama hacked Mduduzi Mdantsane on the edge of the box and Kgaswane made no mistake to give the hosts the lead and register his third of the season.

City wasted a number of opportunities in the second half where they dominated possession but Kgaswane took his chance on the stroke of full-time to register his fourth goal of the season and three points for Baroka.