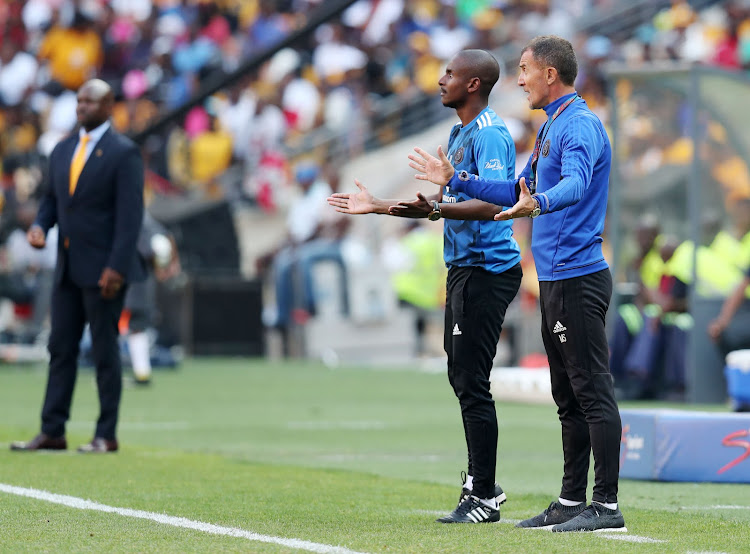 With both Orlando Pirates and Kaizer Chiefs chasing leaders Mamelodi Sundowns for the Absa Premiership title‚ Saturday’s derby will be anything but the dour affair it has turned out to be in recent years.

Pirates coach Milutin Sredojevic predicted that the teams would not sit back and the game would open up.

“Sitting back will not bring any points to either of us‚" he said.

"A draw would mean we are still just one point ahead of them.

"It will be end-to-end stuff and we are expecting thrilling football.

"The present situation that we are in means we have to go for the win.

"There are no other calculations to make but a win.

"And I’m convinced that is also the case for Chiefs. It means a promise of big football!”

Pirates go into the game in second place with 36 points‚ one more than Chiefs.

Sundowns sit on 40 points with all three clubs left with eight games to go in the league season.

Pirates will play in the derby on the back of a morale boosting 4-2 away win over Chippa United in Port Elizabeth on Sunday while Chiefs‚ despite drawing at home with Bloemfontein Celtic on Saturday night‚ have not lost any of their lastv10 matches.

“I can assure you something‚ the derby is a totally different ball game.

"It could have happened that Chiefs had beaten Celtic 5-0 and we had lost 5-0 (to Chippa).

"But still no one would be able to guarantee what happens on Saturday (at Soccer City). This is the beauty of this big derby.

“What the game on the day will bring us we cannot be sure.”

The Pirates coach said he had been surprised that his team’s fans were significantly outnumbered by those backing Chiefs at the last derby in October.

“I believe with our performances so far in 2018‚ we have given an invitation letter to Orlando Pirates’ supporters to come to Soccer City in numbers because their presence as the 12th player will boost us.

“What we have done so far this year is because of player No. 12‚” he said in a reference to increased support in recent games as Pirates have won several key clashes‚ including away at Sundowns.

“We are looking for player No. 12 (the supporters) to be that playmaker that injects us with that extra motivation to stretch all football … and human … limits against a top class team like Kaizer Chiefs‚” the Serbian-born coach added.

Muhsin Ertugral says a heart-to-heart with Thabo Mosadi has opened the door for a return to the Ajax Cape Town side for the explosive winger.
Sport
4 years ago

Gavin Hunt has hailed the potential of right wing Abednego Mosiatlhaga and has tipped him to play a role for the club in both domestic and ...
Sport
4 years ago