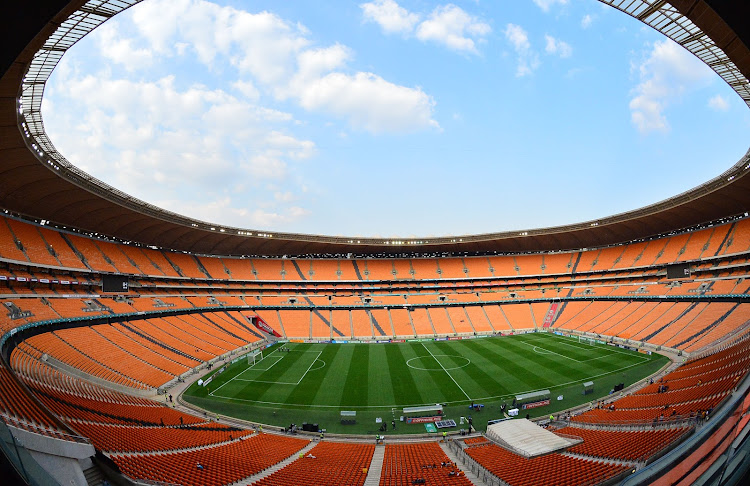 General view of the FNB Stadium during the 2017 Nedbank Cup match between Kaizer Chiefs and SuperSport United at the FNB Stadium, South Africa on 22 April 2017.
Image: Samuel Shivambu/BackpagePix

The hype around Saturday’s Soweto Derby between Orlando Pirates and Kaizer Chiefs will be matched by the capacity crowd of about 88 000 fans at the FNB Stadium judging by close to 70 000 tickets that were said to have been sold by Tuesday afternoon.

Pirates media officer Thandi Merafe confirmed on Tuesday that everything seems to be going according to plan in as far as the ticket sales and all the logistics of a game classified as one of South Africa’s biggest sporting spectacles are concerned.

“We are confident that this will be a sold out game‚” said Merafe‚ whose team will be the hosts against the archrivals they are chasing the Absa Premiership title race.

Stadium Management SA CEO Jacques Grobbelaar also said the security systems in and around the stadium will be tight on Saturday and no one without a valid ticket will be allowed to go near the stadium precinct.

“We have private security‚ SAPS and JMPD who will be assisting us with security on the day.

"Those who will be driving in without valid parking tickets won’t be allowed near the stadium.

“We also urge all our fans to come early in order to avoid traffic and all the incidents that may occur close to kick off when everyone is pushing‚ trying to get in‚” said Grobelaar.

The league derby between these Soweto giants will be 42nd since the Premier Soccer League was formed in 1996.

The first round match in October ended in 0-0 draw‚ while 21 of previous 41 also ended in stalemates.

Champions Bidvest Wits and SuperSport United will play on back-to-back days in Angola in the next round of African club competition next week while ...
Sport
3 years ago

Shots were fired early‚ though it was friendly fire made in banter‚ by Kaizer Chiefs’ defender Ramahlwe Mphahlele at Orlando Pirates counterpart ...
Sport
3 years ago