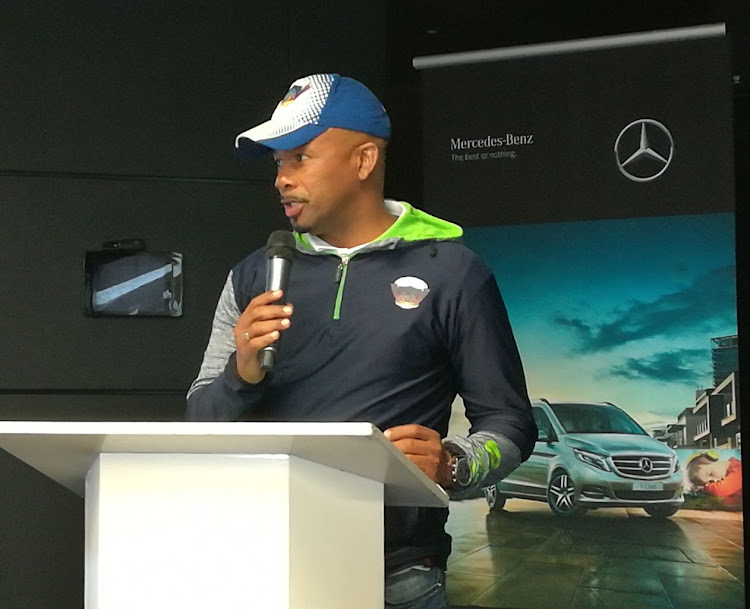 Chippa United head coach Teboho Moloi speaks during the club's partnership with Mercedes-Benz SA for the announcement of the New Year’s Cup for amateur teams hosted by the PSL outfit and the motor vehicle manufacturing company in Centurion, Pretoria, on Friday 1 December 2017.
Image: Mahlatse Mphahlele

But the United coach insists that their hopes of a top four finish this season are still alive and they can progress towards that direction in Cape Town on Friday.

“If you look at the team we have‚ it’s a team that has been given glory for playing this ‘attractive’ football of just passing the ball and knocking it round and if they win‚ they win and if they lose‚ they lose and never having the ambition of going to the top eight‚” he said of the rigid tactical philosophy imposed by his predecessor Dan Malesela.

But Moloi‚ who has employed a more attacking approach albeit a little loose at times‚ said he wanted a top four finish amid clearly set goals and targets and is looking for full points against struggling Cape Town City at the Athlone Stadium on Friday night.

“The last three years we have been fighting to survive‚ to avoid relegation.

“I don’t look at what is behind me. I’m looking rather at what is in front of me and this is the spirit that I want to bring into the team.

“I’m telling them ‘The football that you were playing‚ everybody was praising you for but that football didn’t take you anywhere‚ and at the end of the season you were fighting to avoid relegation’.

Chippa go into the game (kick off 8pm) in ninth place on 27 points but are only seven off fourth spot.

“I still have that belief that we can still get into the top four because of how tight the league is and how the results are going. It’s so unpredictable.

"It’s just for the players to have that belief that we can get results and get to where we are supposed to go. I’m still positive and maintain we can still do it.”

Victory for Ajax Cape Town over SuperSport United on Wednesday came as part of a slow process that has seen coach Muhsin Ertugral try to fix matters ...
Sport
4 years ago

The atmosphere and all the euphoria that goes with the Soweto derby between Kaizer Chiefs and Orlando Pirates could have an adverse effect on the ...
Sport
4 years ago

Kaizer Chiefs coach Steve Komphela is clearly growing increasingly frustrated at what is‚ in fact‚ a plainly incorrect common perception that his ...
Sport
4 years ago

Kaizer Chiefs coach Steve Komphela has laid his cards in the table and said that whoever wins the Soweto derby on Saturday stands a chance of ...
Sport
4 years ago