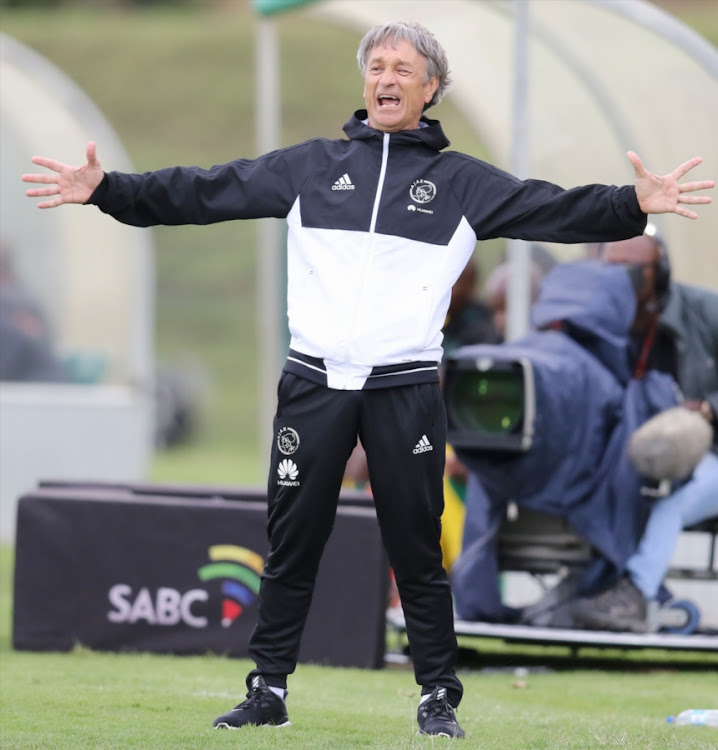 Victory for Ajax Cape Town over SuperSport United on Wednesday came as part of a slow process that has seen coach Muhsin Ertugral try to fix matters at the relegation-threatened club‚ almost department-by-department.

“I always say it is a process‚ but I knew that this team always had the capacity.

"Of course‚ it is always easy to say that after you’ve won but we also had a very organised win when we beat Orlando Pirates‚” said the Ajax coach after the 2-0 victory over SuperSport at the Athlone Stadium.

It was a result that lifted Ajax out of the bottom two places and gives them a major lift in their battle to stay in the top-flight.

“We had to start first with the defence and our organisation when we lose the ball.

"We have moved on from that to the next level‚ which was what were we going to do when we won possession and looked to countered.

"Should we go down the wing or go deep (through the middle)? There were a lot of elements we had to look into.

"You can’t just go out straight away and play offensive football‚” he said of the process of trying to fix things at the club since taking over at the end of last year.

The game against SuperSport was the first in a long time where Ajax were really on the front foot from the start. “We did that in the first 20 minutes which they didn’t expect at all.

"We pressed well and shut them down completely when they had possession‚ pushing them into certain areas and then closing them down.

"They couldn’t cope with it and it gave us two or three chances right in the first 20 minutes.

“Usually these chances go in when you are high on confidence and sitting in the top five (in the standings).

"But because we are very anxious‚ these chances did not go in. This is quite normal in football.

“I was just worried that they could catch us on the counter because they have good players.

“I wanted to get one goal and then to close the shop and look to catch them on a counter.

"It worked for us‚ we had the counter and from the counter‚ we got a little bit of a lucky goal. But it came from Tendai (Ndoro) and I was waiting for that.

“But when you look at (the game) overall‚ I think we completely deserved to win‚ also because of the attitude of the players.

“But‚ because we are still worried about our situation‚ sometimes we are still dropping too far back and this is something that we have to be careful of‚” he added‚ announcing possibly the agenda for the next department he will be looking to fix.

“It was marvelous to watch the team where everyone did his job well.”

The atmosphere and all the euphoria that goes with the Soweto derby between Kaizer Chiefs and Orlando Pirates could have an adverse effect on the ...
Sport
3 years ago

Kaizer Chiefs coach Steve Komphela is clearly growing increasingly frustrated at what is‚ in fact‚ a plainly incorrect common perception that his ...
Sport
3 years ago