Why Orlando Pirates will win the Soweto derby 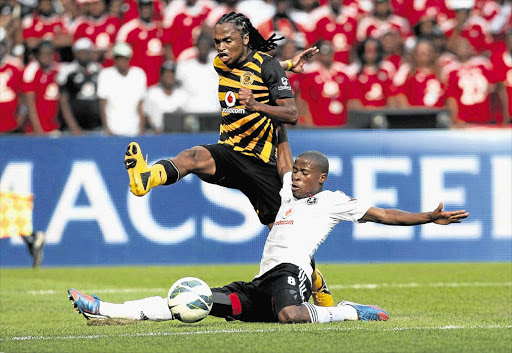 Chiefs have been unbeaten in 10 games. But in most recent form Pirates have more wins from their last five matches (three)‚ even if they’ve lost one and drawn one.

Amakhosi’s three draws and two wins points to a less adventurous approach and indicates that Bucs like to go for the jugular more‚ while Chiefs prefer to wait and see what will happen before making their move.

Just like pundits look at racehorses and see how they move‚ or boxers sparring to see how they're landing their punches and getting around the ring‚ one can see when a football team are moving well.

Orlando Pirates are‚ Kaizer Chiefs sort of are. Pirates are dynamic in attack right now. Their 3-4-3 system‚ and the energetic manner in which a superbly conditioned team utilise it‚ means they can have seven players going forward when they have the ball‚ and when they lose it‚ seven behind it very quickly.

3. Pirates have used the same system‚ but better

Pirates‚ after a 3-0 hammering by Ajax Cape Town in the Nedbank Cup‚ switched to the same 3-4-3 that has been so successful for Chief coach Steve Komphela.

But‚ perhaps because Bucs have an edge in quality of players at their disposal‚ they’ve utilised it better. They are more positive‚ and less prone to being pushed back‚ meaning Pirates genuinely do play with three centrebacks and two attacking wingbacks‚ where Chiefs can look like they have five defenders in games where they struggle.

The youth of Bucs’ wingbacks‚ Innocent Maela and Mthokozisi Dube‚ has been influential in the 4-3-3 working better for them‚ as it means they have the energy to get forward and back all game‚ with pace‚ without tiring.

4. The combination of Sredojevic and Mokwena

Pirates coach Milutin Sredojevic might have played in just three derbies – one this season and two in his previous stint in 2006 – but he has more experience in big matches around the continent than Komphela.

On the evidence of this season “Micho” has shown he might just be one of the best coaches in Africa‚ and a very good fit for Pirates.

He started by turning around last season’s woefully weak 11th-placed finishers with an improved defence‚ and now the attack is getting there too. He’s cleverly played down Pirates’ title chances‚ even though they are just four points behind leaders Mamelodi Sundowns‚ knowing he does not want his team to get ahead of themselves.

And do not underestimate the influence in gameplan‚ tactics and advice that must have come from Mokwena‚ Bucs’ wunderkind assistant-coach poached from Sundowns in the off-season.

If either of these two teams are to break the deadlock of six of the past eight derbies ending in a draw‚ and over the 90 minutes‚ they need to have an effective attack.

Chiefs have one‚ but they’ve not looked so fluid and dynamic as Pirates. Bucs would be ill-advised to be too safety-first when the frontline of Luvuyo Memela‚ Thembinkosi Lorch‚ Justin Shonga and Bernard Morrison are arguably the strength of the team.