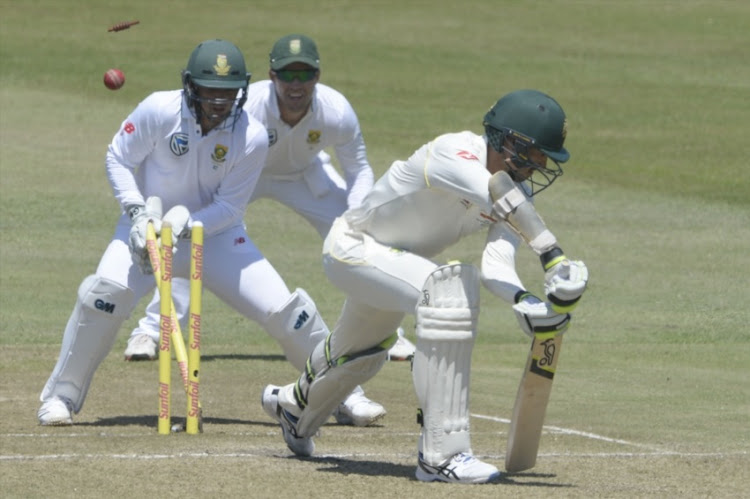 Mitchell Starc of Australia bowled by Keshav Maharaj of the Proteas during day 2 of the 1st Sunfoil Test match between South Africa and Australia at Sahara Stadium Kingsmead on March 02, 2018 in Durban.
Image: Lee Warren/Gallo Images

The best performance by a South Africa slow bowler since readmission couldn’t stop Australia from taking control of the first test at Kingsmead on Saturday.

Left-arm spinner Keshav Maharaj added figures of 3/93 to the 5/123 he claimed in the first innings to earn the accolade.

But Australia’s second innings score of 213/9 when bad light forced the close 20 overs early means they will take a lead of 402 into the fourth day.

No team have chased more than 340 to win in the 42 tests previously played at the ground.

Australia started their second dig on Saturday morning, and Cameron Bancroft and David Warner eased to a half-century stand.

The partnership was ended an hour into the day’s play when Warner mistimed a pull off Kagiso Rabada and picked out mid-on.

Warner’s 28 was part of a stand of 56, and his dismissal was followed five overs later by Usman Khawaja’s for six when he tried to reverse sweep Maharaj and gloved a looping catch to wicketkeeper Quinton de Kock.

Bancroft and Smith seemed to be settling into a lengthy partnership, but with their stand worth 37 Bancroft made an ill-advised dart down the pitch to Maharaj, who saw him coming and had him easily stumped for 53, his second half-century in his sixth test.

The three wickets South Africa took in the morning session looked like success, but they needed to make more significant headway more efficiently against opponents who reeled in 112 runs in the 27 overs bowled.

South Africa’s bowlers were more effective between lunch and tea, when Australia scored 63 runs and lost Steve Smith for 38 — he was trapped in front by the part-time left-arm spin of Dean Elgar — and Tim Paine, who was caught at slip for 14 off Maharaj with what became the last ball before tea.

Morne Morkel struck twice in six overs after tea, when he had Shaun Marsh caught at second slip for 33 and Mitchell Starc taken in the covers for seven.

Elgar held a sharp catch to remove Starc, but immediately left the field to seek treatment for a finger he injured in the process.

Morkel had a third when Nathan Lyon edged to first slip, which means he needs three more wickets to become the fifth bowler to take 300 in tests for South Africa.

Batting conditions seemed to worsen as the day’s play wore on, which will not hearten South Africa in their bid to win — or even save — the match.
Morkel took 3/42.