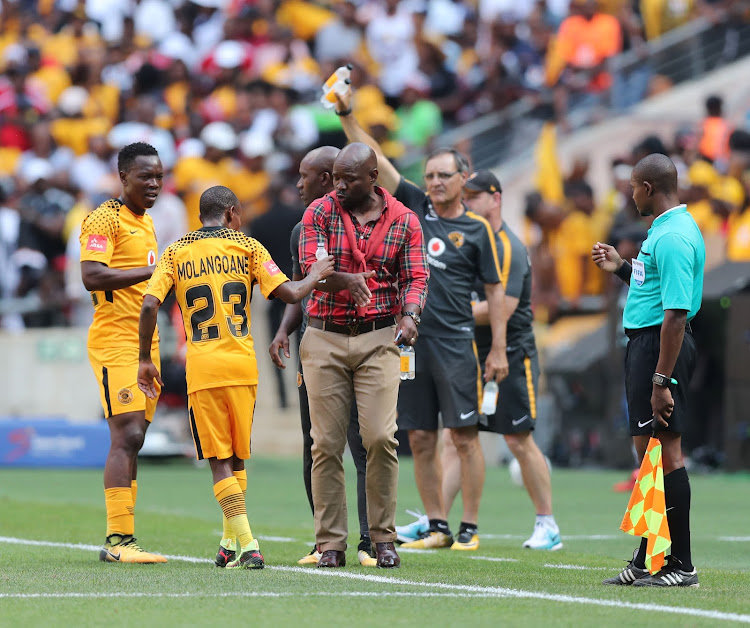 Amid hushed suggestions he could be the next man to be axed after the demoralising 3-1 rout by Orlando Pirates in the Soweto derby on Saturday‚ Kaizer Chiefs coach Steve Komphela maintained a defiant stand and refused to throw in the towel in the race to win the Absa Premiership title.

With two other Premier Soccer League (PSL) coaches - Eric Tinkler at SuperSport United and Teboho Moloi at Chippa United - having lost their jobs on Friday and Saturday respectively due to their teams' poor performances‚ Komphela was asked questions about his future at Chiefs after the humiliating defeat against Pirates.

"Football is about pressure‚ always pressure‚" said Komphela before giving a long sermon-like response that would have impressed a pastor.

Chiefs' crushing defeat to Pirates‚ a second one for Komphela in six league meetings against Bucs‚ saw Amakhosi losing momentum in their pursuit of league leaders Mamelodi Sundowns who are now eight points clear of them with seven matches to go.

But Komphela‚ whose team moved down to fifth place on the log from the third position they occupied before meeting Pirates‚ insisted that his goal-shy charges still have a mathematical chance in the title race.

"Seven by three is 21‚" is how Komphela kicked off the reasoning behind his defiant stand.

"We cannot stop the show (fighting for the title)‚ we will have to keep pushing and performing. You don't know what's going to happen with the rest of the other matters."

Komphela admitted though that the defeat against their traditional rivals has dealt a massive dent to their league ambitions.

"Are we lacking behind a bit‚ yes we did. It was a massive opportunity for us to get closer to Sundowns.

"Orlando Pirates... they are there. It's a hell (the victory) of a confidence booster for them. It could have been for us.

"Should it (the defeat) write us off? I don't think we should feel like that. We have the obligation and responsibility to keep performing."

Komphela admitted the result against Pirates might derail the team and demoralise the players. He said his players will have to be mentally strong to recover from it.

"The beauty of the professional is to suffer setbacks consistently and keep rising. And this day is no different.

"The beauty of it is that we are playing Stellenbosch FC in the Nedbank (in Durban on Saturday). That could come in as therapy.

"I hope we go through that match‚ win properly and then gain momentum and forget (Pirates defeat)."

But will forgetting and brushing aside this crucial defeat be an easy task for Komphela and his charges?

"It not going to be easy. I don't think we will sleep (on Saturday) up until (Sunday) morning. This thing (defeat) will stick with the players.

"So how you get rid of it‚ you just keep the focus."

The gloss on the Soweto derby was restored after Orlando Pirates convincingly beat Kaizer Chiefs 3-1 in a lively match that probably ended Chiefs ...
Sport
3 years ago

The best performance by a South Africa slow bowler since readmission couldn’t stop Australia from taking control of the first test at Kingsmead on ...
Sport
3 years ago

Orlando Pirates and Kaizer Chiefs write the latest chapter in the rich history of the Soweto derby at the FNB Stadium with a vital Absa Premiership ...
Sport
3 years ago

Milutin “Micho” Sredojevic has said he has deliberately played down talk of Orlando Pirates wining the Absa Premiership to keep his players ...
Sport
3 years ago