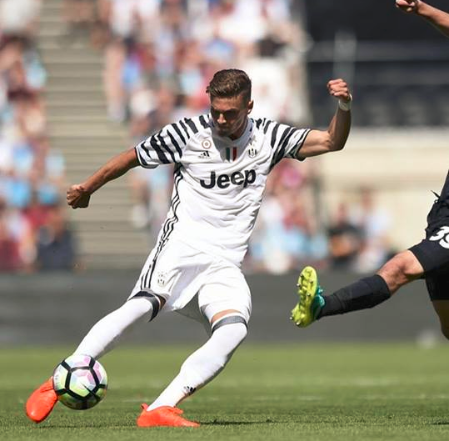 South African-born full back Joel Untersee in the colours of Juventus on 14 June 2017.
Image: Supplied

Bafana Bafana coach Stuart Baxter has said that he has secured the services of right-back Joel Untersee‚ currently on loan from Serie A giants Juventus to Serie B outfit Empoli‚ to play for the South African national team.

Untersee‚ born in Benoni‚ had played for Switzerland‚ where he grew up and resides officially‚ at junior level.

Baxter had been in contact for several months with the 24-year-old right-back‚ who was signed in 2016 by Juventus from Swiss club Vaduz but spent the 2016-17 and 2017-18 seasons on loan at Serie B Brescia then Empoli.

“In the Winter I’ve been in Europe twice.

“A player who plays in Italy‚ who was born in Benoni‚ Joel Untersee‚ who’s committed himself to South Africa instead of Switzerland.

“He had played Under-21 for Switzerland‚ and he now wants to turn back to South Africa.”

Untersee has played 13 league games in Serie B this season with Empoli‚ and played 39 in 2016-17 for Brescia.

The South African Football Association (SAFA) will reveal Bafana Bafana’s programme of friendly matches for the coming months on Tuesday morning‚ but ...
Sport
4 years ago

Former Bafana Bafana captain Steven Pienaar has announced his retirement from the game, bringing to an end an illustrious 18-year career that made ...
Sport
4 years ago