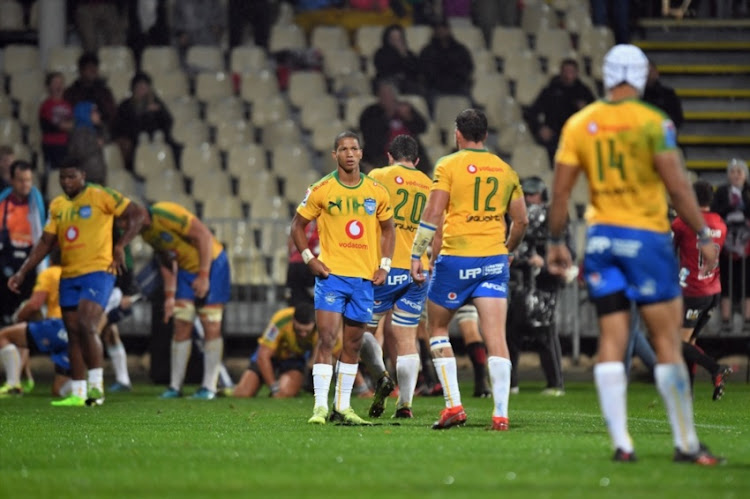 Manie Libbok of the Bulls (C) and his team mates react during the round six Super Rugby match between the Crusaders and the Bulls on March 23, 2018 in Christchurch, New Zealand.
Image: Kai Schwoerer/Getty Images

The Bulls ended their Australasian tour of three successive losses to the Reds‚ Chiefs and defending champions Crusaders on Friday but coach John Mitchell said his team are growing and they return home having learned important lessons.

As a result of the 33-14 defeat to the eight-time champions Crusaders in rainy Christchurch on Friday‚ the Bulls remain fourth in the South African Conference and they have a mountain to climb reviving their campaign.

After five matches they have played so far this campaign‚ the Bulls have only won once against the Hurricanes in their first match of the season but they have gone on to lose to the Lions‚ Reds‚ Chiefs and Crusaders.

Speaking after the Crusaders defeat‚ Mitchell‚ who is in his first season as Bulls coach after replacing Nollis Marais‚ admitted is team have much work to do to be anywhere near a final product.

“It is true that the gap of where we are now and where we want to be is noticeable‚” he said.

“I know that we will always be measured on results but if you go a layer deeper‚ there is definitely growth and we need to understand and learn quickly in this competition.”

Mitchell admitted relief that the Bulls could now return home after a torrid four weeks overseas.

“We now go home where we will stay in Africa for a number of games and hopefully we can take these lessons to our familiar environment‚ which is a place of comfort.

“I have been impressed with the attitude and work ethic of the guys. We must just try to get frustration away from them.

“That is important when you are young and growing and I also have to remain patient in their development.”

In their next match‚ the Bulls are at home against the Stormers‚ who host the Reds in Cape Town on Saturday‚ March 31‚ where they will looking to get back to winning ways after four straight losses.