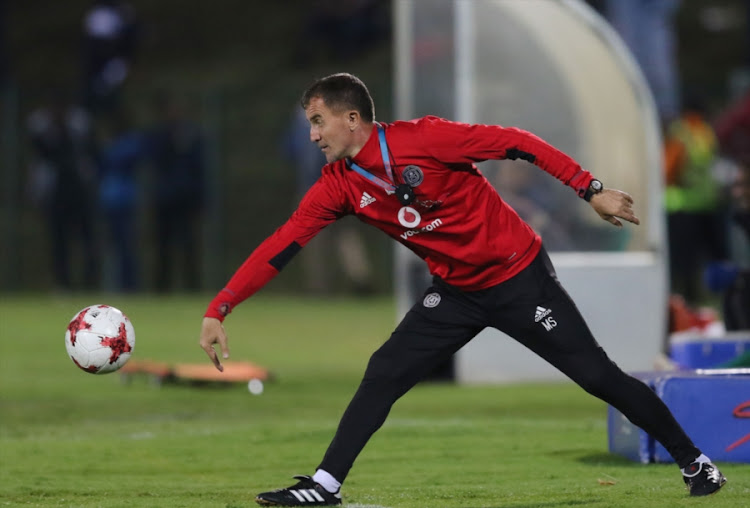 Orlando Pirates coach Milutin Sredojevic was more than chuffed to have out-pointed his lecturer Veselin Jelusic but in the bigger scheme of things‚ knows the Buccaneers are still a work in progress.

After beating Bloemfontein Celtic 2-1 at the Orlando Stadium on Wednesday evening‚ Pirates kept up the pressure on leaders Mamelodi Sundowns.

However‚ Pitso Mosimane’s side snatched a crucial 2-0 win against Chippa United and they still have a game in hand. On the other hand‚ Pirates have won five consecutive league matches.

While games in hand have proven to be as useful as a candle in the wind‚ Sredojevic was happy with the three points that could have been lost if Celtic were calm and composed in front of goal.

“When you look at the issue of being a work in progress‚ you can never say you’ve reached a certain percentage because there’s no logic‚” Sredojevic said.

“Sometimes in football one plus one can equal five and not two so the consistency of progressively going up is not there.

"We’ve won five consecutive matches and in some we’ve played very well and in others we haven’t played so well.

“What's important is that the winning culture that’s synonymous with this badge is with us and with the moving of time‚ we improve enough to a point where things become automatic for us.

"Up to now‚ they’re not automatic for us and we struggled in this match.”

Whether Sredojevic likes it or not‚ the threat of Sundowns hangs ominously on the horizon when it comes to his league chances.

While Sundowns and Pirates cancelled each other out with respective 3-1 wins‚ Pirates were the better side in both games and were rewarded for their accurate persistence in the return game in Pretoria early this year.

The point difference that separates Sundowns and Pirates does make for an interesting title run in but Sredojevic is only worried about how they should improve and what the troubled SuperSport United bring to the table next week.

“Before thinking about Sundowns‚ we need to think about how we need to improve our performance.

"We need to think as to how we need to improve our football so it can be better in order for us to collect points.

“We know that at present‚ things aren’t in our hands. Whatever it is that we have in our hands that’s in line with our destiny – we’ll approach the last five games like a cup final‚” Sredojevic said.

“I'm happy that we’re in a position that will be leading us to Africa because the continent is missing Orlando Pirates.

“We shall do anything possible in the next five matches in order to achieve that goal.

“We also have to bear in mind that last year’s Caf Confederation Cup finalists (SuperSport United‚ at Mbombela Stadium on Wednesday) lie in wait next week and that’s going to be a top challenge.”