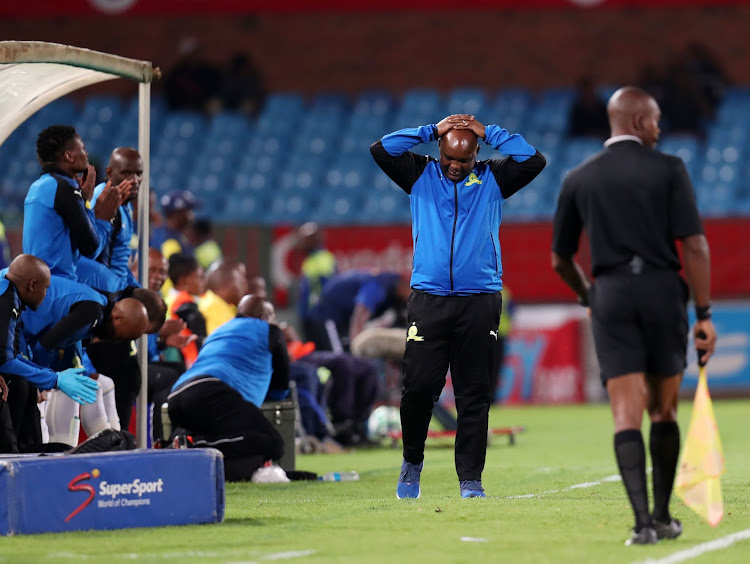 Forget the frills and thrills‚ it’s just bump and grind at this stage of the season‚ said Mamelodi Sundowns coach Pitso Mosimane as his side kept their noses in front in the title race after Wednesday’s matches for all the top contenders.

Sundowns scored in either half at Loftus Versfeld to beat Chippa United 2-0 and stay a single point ahead of second-placed Orlando Pirates‚ who won 2-1 against Bloemfontein Celtic at Orlando Stadium.

Downs have a game in hand as the season heads to an exciting conclusion.

“They have been a thorn in the flesh for us‚ not easy‚” said Mosimane of Port Elizabeth-based club Chippa‚ who had not lost to Sundowns in their preceding four head-to-head clashes.

“We didn’t start well‚ we struggled a little bit‚ you could see the game on Sunday took a lot from us‚” added the coach‚ referring to the Nedbank Cup quarterfinal win away over Cape Town City on Sunday.

“We couldn’t find our free-flowing passing in the first 20 minutes but that’s not such a big problem as long as you are not in danger.

“Let’s be honest‚ they could have scored from their breaks in the first two breaks but Denis (Onyango) came to the party and showed he is a big goalkeeper and rescued the team.

“But as the game went on‚ we knew the goal would come and I think we managed that.

“We checked any breaks they might have had on counterattacks. We sought to look after the ball. Once we got the second goal it was left to us just to manage the game‚” added Mosimane.

Tau scored with Sundowns’ first real attack in the 37th minute‚ taking advantage of some poor defending‚ and Khama Billiat finished off a clever counterattack in the 80th minute after a sublime back-heel from Themba Zwane.

“We are just happy to park the points. You could see the game we played‚ no frills. Just grind it‚ get the points‚ get the goals and work harder.

“What are you going to do with good football at this stage of the season when there are just five games left?” he asked.

“You can play good football at the beginning of the season and show off.

“This time of the season is tough‚ you must take the three points and go home.”