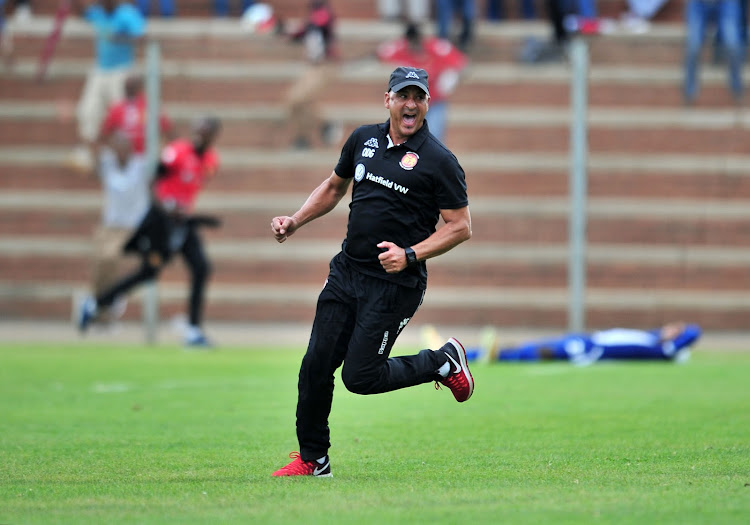 Highlands Park will clinch the National First Division (NFD) title and promotion back to the Premier Soccer League (PSL) if they win or draw against eighth-placed Pretoria University at Makhulong Stadium in Tembisa on Saturday.

Highlands‚ relegated from the PSL as last-placed finishers last season‚ have run away with the NFD in the second half of the season and‚ with 56 points from 25 matches‚ have a 15-point lead over second-placed Black Leopards.

As it stands only the virtually impossible scenario of Park losing their remaining five games‚ and Leopards winning all of theirs‚ would deny Highlands the championship.

A point on Saturday at their Makhulong home ground will put the matter mathematically beyond doubt and see Highlands crowned champions.

The PSL‚ though‚ has said the trophy‚ as is custom‚ will only be handed over at Park’s final game of the season‚ away against Stellenbosch FC on May 6.

Highlands – coached by former Bafana Bafana assistant-coach Owen Da Gama‚ assisted by the coach who promoted the club to the PSL in 2015-16‚ Allan Freese – have run away with the NFD in the second half of the season.

Their last of five defeats was against Mbombela United‚ 1-0 away on September 23.

Since then Highlands have gone 20 games unbeaten‚ winning 15 and drawing five‚ scoring a staggering 46 goals to six conceded.

In what can only be described as a mismatch‚ their last six games have seen Da Gama’s team win 4-0 (against Royal Eagles)‚ 4-0 (Jomo Cosmos)‚ 1-0 (Uthongathi FC)‚ 3-0 (Witbank Spurs)‚ 7-1 (Mbombela United) and 4-0 (last weekend against Tshakhuma Tsha Madzivhandila).

Mamelodi Sundowns are bracing themselves for all-out attack from ‘cocky’ Baroka FC when the league leaders make the trip up the N1 to Polokwane for ...
Sport
4 years ago

Former African champions Enyimba are expected to attract some lively expatriate support at Bidvest Stadium on Friday night as they meet hosts Bidvest ...
Sport
4 years ago