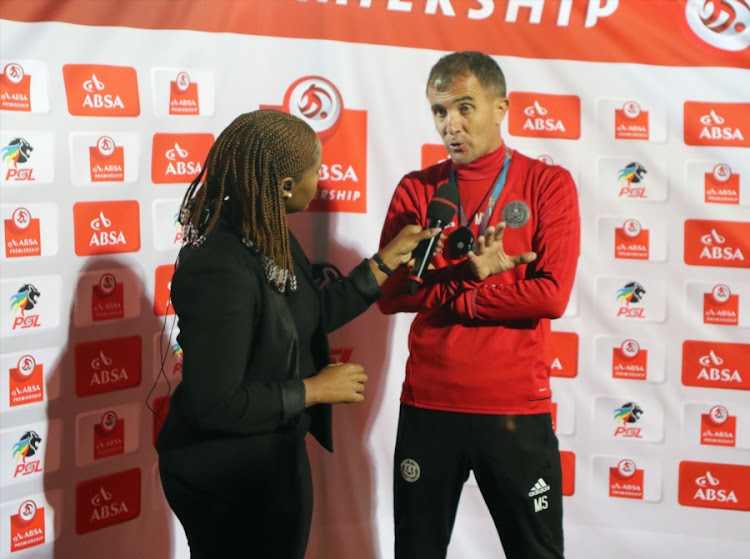 The significance of Bidvest Wits and SuperSport United's participation in the CAF Confederation Cup is not lost on Premier Soccer League coach of the month and Orlando Pirates mentor Milutin Sredojevic.

The Serbian‚ who fell for an April Fool's joke in regards with SuperSport cancelling their cup tie with Kenyan side Gor Mahia‚ said Kaitano Tembo's side have a fight on their hands.

They clash on Sunday in the first leg of the Confederation Cup play-off stage‚ the winners of which reach the group stage.

“SuperSport United will have very serious business because Gor Mahia is a well-supported and‚ if I can say‚ the most tribal team in Kenya.

"They've got massive support and I think they've a Caf tournament before. It's going to be very hard for SuperSport but they have the experience and the confidence that they'll represent South Africa's football in the best possible way‚” Sredojevic said.

Sredojevic said the away leg in Aba in south-east Nigeria on April 17 could be an even tougher prospect than for SuperSport in Kenya.

“Going to Aba is an absolute nightmare. I've been there and I'm proudly one of three coaches that has never lost a match in Nigeria.

"Aba is a special place from the point of logistics. Landing in Port Harcourt and going 150km (62.2km) to Aba is difficult.

"I wish them all the best and I believe the quality that they have‚ they'll represent South African football in the best way.”

Being a regular CAF club competition semi-finalist and having coached in Ethiopia‚ Sudan and Uganda‚ Sredojevic knows what's required to make the continental grade.

If Pirates don’t win the league‚ getting back into the coveted CAF Champions League will be as good as winning the domestic long haul.

After fallow years since Sredojevic took an unheralded Pirates team to the CAF Champions League semi-finals in 2006‚ Pirates' run to the 2013 CAF Champions League final where they lost to Egyptian giants Al-Ahly reignited South African interest in the competition in a big way.

Sredojevic said they would be ready to answer the continental call if they finish in the right positions.

“I count myself as a lucky person in the lake that is African football. There are many crocodiles and I know how to swim in those waters.

"I believe with 18 years of experience on the African continent‚ I can accept the stability that Pirates have on the log.

"We have a dream and we also want to add more stars to what we already have since 1995. When it comes‚ we'll do anything possible to qualify for the continent‚” Sredojevic said.

“We’ll work very hard in the remaining five matches to qualify and when it does come‚ we'll plan accordingly.”

Kaizer Chiefs fans tell Siphiwe Tshabalala‚ when he encounters‚ that they “want trophies”‚ the veteran Amakhosi star said on Thursday.
Sport
3 years ago

Orlando Pirates may be caught up in their bid to usurp Mamelodi Sundowns from the log summit but their clean-out of the Premier Soccer League monthly ...
Sport
3 years ago

Liverpool have apologised to Manchester City after bottles were thrown at their team bus as they arrived at Anfield for the Champions League ...
Sport
3 years ago

Gauteng-based Kaizer Chiefs fans will have to travel to Moses Mabhida Stadium in Durban on April 21 if they want to watch their beloved club take on ...
Sport
3 years ago
Next Article