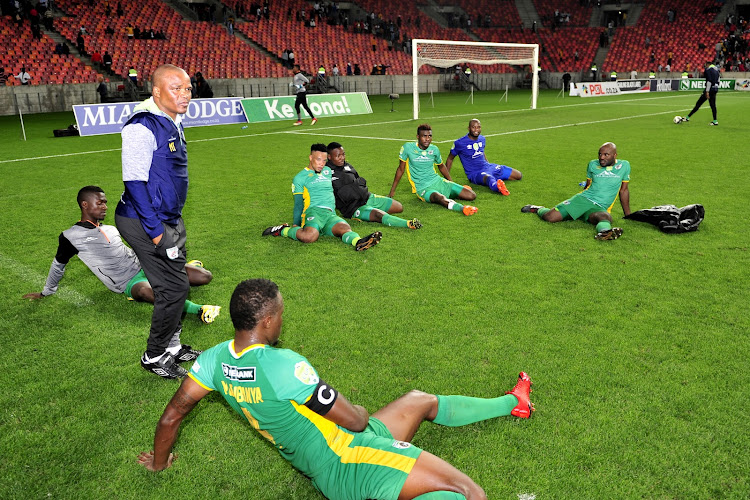 Mamelodi Sundowns are bracing themselves for all-out attack from ‘cocky’ Baroka FC when the league leaders make the trip up the N1 to Polokwane for Sunday’s key Absa Premiership fixture at the Peter Mokaba Stadium.

“Baroka have a good attack‚ they are cocky‚ they are free-spirited. They play well. That boy from Zimbabwe‚ what’s his name [Talent Chawapiwa]? He takes on everybody one-on-one.

“You saw what he did to Mathoho. He’s very difficult to manage. They are a good team‚” said Sundowns coach Pitso Mosimane‚ speaking in the same scatter-gun style he expects from Baroka.

“Sometimes when these smaller teams play the bigger teams – and you see it a lot with Kaizer Chiefs probably because they’ve got more supporters – they just get excited‚ go all over the place as they try to win.

“It’s very difficult for us and I think it will be a game decided by a single goal. It’s a game of 1-0. If we can get two‚ that would be really good.

“But we must respect them. They are a team that comes to you‚ they come to your face‚ so we know what to expect.”

For Sundowns‚ it is not only a chance to keep up their slender lead at the helm of the standings but also their impressive away record. They have won nine of 12 away matches this season and have only lost on the road at Polokwane City.

The white colours are Sundowns’ away colours.

“But trips can take it out of us. We went to Cape Town [at the weekend] and you could see it was not the Sundowns we really like.

“It’s squeaky-bum time now – it’s that space. Now we have to travel four hours on the bus to Polokwane‚ so it’s all about regeneration.

“We need more legs and others are training for the game. We need other players to come to the party.

“We wanted to take Percy out [in the 2-0 win against Chippa United on Wednesday] but it was better to take Khama out because he is coming back from a long lay-off.

“Against Baroka‚ Khama should be fully fit (from minutes under his belt). Percy is strong and hopefully they will manage to play Baroka.

“After Baroka we have six days‚ before we play against Wits and then we can also be one of the well-rested teams.

“It’s easy for those teams who play every seven or 10 days but when you have to play weekends and Wednesday and you have to win‚ it’s not easy‚” added Mosimane.

Kaizer Chiefs fans tell Siphiwe Tshabalala‚ when he encounters‚ that they “want trophies”‚ the veteran Amakhosi star said on Thursday.
Sport
4 years ago