Komphela and players pelted with missiles as Chippa run riot 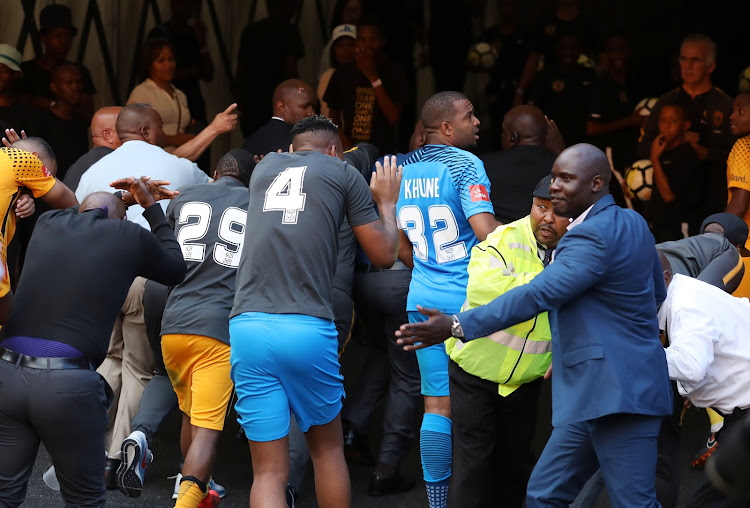 It is a measure of dramatic decline of the Kaizer Chiefs brand that FNB Stadium was nearly empty on Saturday afternoon as Steve Komphela’s side were handed a 3-0 home thrashing by upstarts Chippa United that ended any slim hopes they might have had of a late tilt at the league title.

Embattled head coach Komphela and the players, battered and bruising, had to be escorted off the pitch by police and security personnel as the angry fans bayed for blood after the club's biggest defeat of a so far below average season.

The fans vented out their frustrations and seemed to be destroying everything in their path as they marched towards the tunnel, where Komphela and his troops were met with a myriad of flying objects as they exited the pitch.

Amakhosi, who have not won a trophy in the three season that Komphela has been in charge, are now seemingly out of the Absa Premier title race with seven points adrift of leader Mamelodi Sundowns having played two games more.

Thabo Rakhale, Mxolisi Machupu and Edward Manqele scored as Chippa exploited the advantage of Chiefs being forced to finish down to 10 men when Mulomowandau Mathoho had to go off with concussion after the coach had already made three changes.

It was a performance which exemplified how far Chiefs have fallen as an entertaining force, struggling to score and battling to attract a crowd.

An attendance register could easily have been passed around and each spectator filled in his name before the end of the 90 minutes such was the preponderance of empty orange seats at the imposing World Cup venue.

Fans, or should we really call them followers, only want to watch a winning team and have deserted the club in droves.

Now Chiefs only pull a crowd when on the road, in areas which they infrequently visit.

It is on the back of results like this that Chiefs surely needs to reassess where they are going and understand the massive support they built up over the decades was almost exclusively because they were continually winning silverware.

Now that they have lost that formula, a drastic drop in attendances shows they must find a way to get back to the podium or face fading away.

Chiefs were handed a blow when Ramahlwe Mphahlele felt a twinge in his hamstring and was taken off with less than a quarter-hour played.

Ryan Moon had a 19th minute effort blocked by Akpeyi and Siphiwe Tshabalala sent the rebound wide before Rakhale opened the scoring in the 25th minute.

Abel Mabaso fed him the ball and with a sudden burst of pace, Rakhale eased past Mathoho, who in attempting to get back and challenge, made contact with the ball and, inadvertently, helped Rakhale to wrong foot Itumeleng Khune as the ball trickled into the net.

It was first goal in more than two years for Rakhale, one of the many mercurial talents in the Premier Soccer League who can be a world beater one day and a plain plonker the next.

With Mathoho out, Chiefs were in disarray at the back near the end of the game and Rakhale and man of the match Paseka Mako set up Machupu for a deserved second goal some 15 minutes from time.

Substitute Edward Manqele got the third deep in stoppage time at the end of a square pass from Mako.

Highlands Park roar back into the PSL

Highlands Park have secured promotion to the PSL after a convincing 5-1 win over University of Pretoria in Tembisa on Saturday afternoon.
Sport
4 years ago

Zidane rules out Real guard of honour for Barcelona

Real Madrid coach Zinedine Zidane said on Saturday his side will not offer runaway La Liga leaders Barcelona a guard of honour before the 'Clasico' ...
Sport
4 years ago