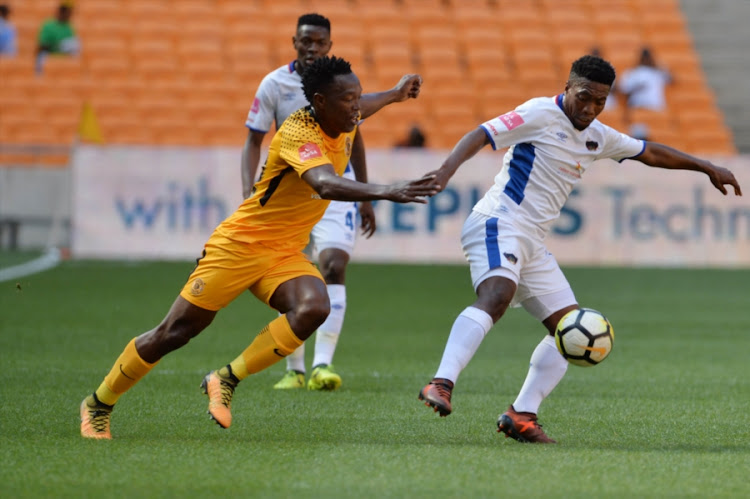 Buyani Sali of Chippa United and Philani Zulu of Kaizer Chiefs vies for the ball during the Absa Premiership match at FNB Stadium on April 07, 2018 in Johannesburg, South Africa.
Image: Lefty Shivambu/Gallo Images

Were Kaizer Chiefs ever on the right track in the 2017-18 season‚ or were the cracks just being papered over‚ and exposed in all their gaping magnitude again by Saturday’s 3-0 embarrassment by Chippa United?

Chiefs looked patently not up to scratch in the early part of the season‚ winning just three of their first nine league and cup games‚ drawing three and losing three.

From a 2-1 away win against Mamelodi Sundowns on October 17‚ where injuries forced coach Steve Komphela to employ an innovative 3-4-3 formation and fast-track youngsters‚ both of which worked out for the coach‚ Amakhosi’s season took an up-turn.

That‚ along with the arrival of big signings in January in Leonardo Castro and Siphelele Ntshangase‚ appeared to see Amakhosi on the right track.

Saturday’s humbling by Chippa at FNB Stadium‚ though‚ suggests that the cracks were just being filled with paper mache‚ not superglue or concrete.

“It does in a way‚ but we as players know what needs to be done‚” Chiefs’ competitive left wingback‚ Philani Zulu‚ one of the successes of what is turning into yet another mediocre season‚ said.

Zulu admitted that the slow start to the season‚ and also an overall too high rate of draws (12 from 26 league games)‚ put pressure on Chiefs in the second half of the campaign so that even when they found form‚ like walking on a tight-rope‚ any slip-up would have greater significance.

“Any bad result plays a certain role on the league‚” said Zulu‚ signed from Maritzburg United at the start of the season and who came into his own making the left wingback position his own after Komphela’s switch to a 3-4-3.

“Because looking back at the games that we should have won‚ that we’ve drawn 0-0 or 1-1‚ it would make a difference now if we had won those games.”

Zulu said he believed the injuries that saw right wingback Ramahlwe Mphahlele go off injured in the 16th minute‚ and centreback Teenage Hadebe at half time‚ were instrumental in Chiefs falling apart against Chippa.

“I can’t really say what went wrong‚ because a lot of things went wrong‚” Zulu said.

“But for me‚ I think with the injuries that we suffered‚ it changed the way we had planned and that’s where they got the better of us.”

Like any loyal charge‚ though‚ Zulu would of course‚ even if he were pressed on it‚ never say what most Amakhosi supporters and critics in the media have been thinking.

Komphela’s introduction for Mphahlele of Bhongolwethu Jayiya – who has barely featured this season‚ and when the coach had Joseph Molangoane on his bench‚ who has‚ and with distinction in that very right wingback position – was surely a clanger.

That Jayiya was later taken off in the 62nd for Dumisani Zuma appears to confirm the error.

Also‚ why did a striker‚ Bernard Parker‚ replace Hadebe?

The cracks are peering through the Christmas wrapping that made Chiefs‚ again‚ flatter to deceive in the middle of the season.

They might be wide enough to deny Chiefs even a third position in the league that once seemed certain‚ and their final chance at preventing a third season trophyless under Komphela in the Nedbank Cup.

Victory over outgoing champions Bidvest Wits at the Athlone Stadium on Wednesday has provided Ajax Cape Town with a chance to now believe they can ...
Sport
4 years ago