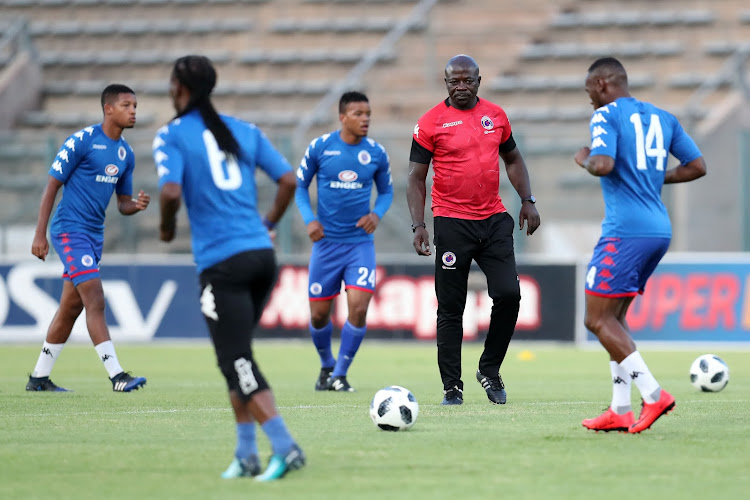 Fatigued SuperSport United’s bid to avoid relegation continues on Saturday when they travel away for a crucial clash against Cape Town City at the Cape Town Stadium.

MTN8 champions Matsatsantsa have been in a surprising free-fall with just a single league success in their last 11 matches‚ and find themselves in 14th‚ just a point ahead of Ajax Cape Town in the 15th-placed relegation playoff position.

There is certainly no love lost between the two Cape Town giants City and Ajax‚ but the former could do their bitter rivals a massive favour by taking points off the Tshwane-based side‚ who have not even managed a goal in their last four encounters as their horror season continues.

They rode their luck at times in Wednesday’s 0-0 draw with Orlando Pirates‚ but showed a solidity in defence that they will need against a City side who will have two big-name players back for the clash in Teko Modise and possibly Matthew Rusike.

Matsatsantsa coach Kaitano Tembo has said his players are well aware of the danger they are in and motivation is not an issue.

"We always have to be positive because we are in this situation. We have to pick ourselves up and motivate the players and keep pushing‚” he said earlier this week.

"We are trying by all means to focus on our remaining matches. We take it game-by-game and not try to put ourselves under pressure.

But Tembo also admits that his fatigued players are struggling in the closing weeks of the season after reaching the Confederation Cup final last year and competing again in this year’s competition‚ which saw them play in Kenya last weekend.

“It can push my players mentality because all we wanted was to not concede [against Pirates]‚ especially in the first half. When we came back we knew we will not have the legs to keep pressing them high‚" he said.

“So we needed to play them on transition and we had a couple of chances on transition. We had to sit back. I think the performance of the team was brilliant especially coming from Kenya."

City have Modise back in action after problems with his hamstring‚ while forward Sibusiso Masina has also recovered from an adductor muscle injury.

“Teko coming back is a big positive for me. He is a key element so I’m looking forward to the SuperSport match‚” City coach Benni McCarthy said.

City have tended to blow hot and cold in the second half of the season‚ but are still targeting a top-three finish and qualification for the continental club competitions‚ finding themselves currently four points behind Maritzburg United in third.

The teams have met twice so far this season‚ with both games finishing 1-1.

SuperSport claimed the MTN8 final on penalties back in September‚ before a league stalemate in December.

Were Kaizer Chiefs ever on the right track in the 2017-18 season‚ or were the cracks just being papered over‚ and exposed in all their gaping ...
Sport
4 years ago

Victory over outgoing champions Bidvest Wits at the Athlone Stadium on Wednesday has provided Ajax Cape Town with a chance to now believe they can ...
Sport
4 years ago