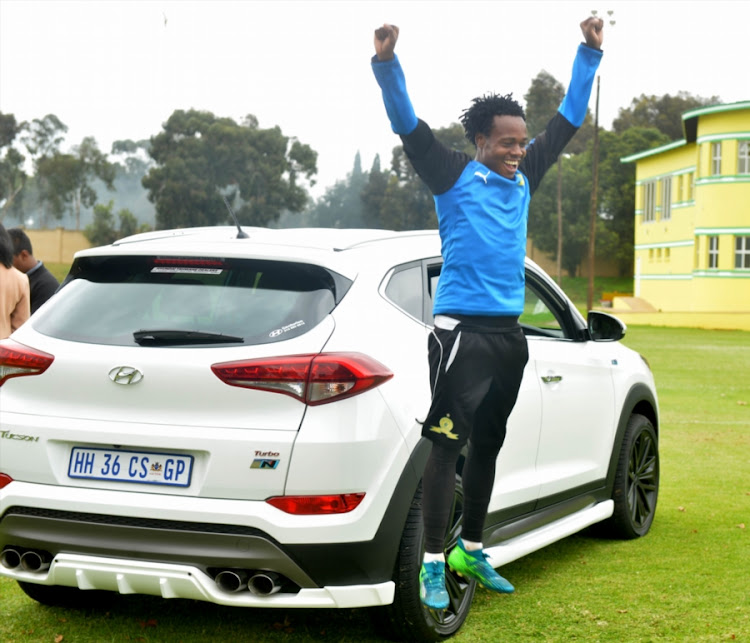 Bafana Bafana and Mamelodi Sundowns star forward Percy Tau ecstatic after being presented with a brand new car from the club's vehicle partner Hyundai during an open media day at Chloorkop training base on April 12 2018.
Image: Lefty Shivambu/Gallo Images

For obvious reasons‚ Mamelodi Sundowns coach Pitso Mosimane and his players have spent the better part of this week speaking in flattering terms about their weekend’s opponents in the Absa Premiership‚ Bidvest Wits.

Sundowns host Wits in a vital PSL clash at Loftus on Saturday afternoon where three points will bring the Brazilians closer to a record-extending eight titles and their second in three seasons.

Rather than talking up Downs’ chances of completing a league double over Wits this season‚ star midfielder Percy Tau said the Students need to be respected because they have what it takes to derail his team’s march to the finishing line.

“We must respect them because it is never easy playing against them. We will do everything to try and win the match because there is a lot at stake.

“We lost the league to them last season and it was something that hurt us very much‚” he said.

Mosimane echoed similar sentiments about Wits needing not to be underestimated‚ because he said‚ they have a good coach in Gavin Hunt who is difficult to read due to the manner in which he changes his team.

“The challenge with Wits is that you will never know who is going to pitch on the day because Gavin changes his team a lot. He is not afraid to change‚ not only the personnel but even the formation‚” Mosimane said.

“You don’t know how many players he is going to play at the back and even after seeing the team list before the match you still can’t be sure until they start playing. Credit must go to him because he is one of the few coaches who gets it right.”

Tau‚ the favourite to be named the PSL’s Player of the Season and also in the running for leading goalscorer‚ said he is not interested in personal accolades but in helping Sundowns to be the first team to cross the line.

“We are not too far in the league‚ we are in the semis of the Nedbank Cup and everyone can see our progress‚ but we never speak about it in the changeroom‚” the forward said.

“We are only focusing on the short-term goal of winning the next match and that is our routine.”

Tau said he is not thinking much about finishing the season as leading goalscorer.

“When you work hard‚ you put yourself in situations that you never wanted to be in. I have tried to score goals and at the moment I am tied with Rodney Ramagalela on 11.

“We will see how it goes but it is not something that I am focusing too much on. I know I can score more goals and I need to keep on improving.

“It will be something nice to be the leading goalscorer but it is not something that will define my season.”

Remnants of salvation for Kaizer Chiefs' season can still self-implode

The past week has been the joint-lowest point for Willard Katsande at Kaizer Chiefs‚ Amakhosi’s veteran midfield hard man has said.
Sport
4 years ago

Fatigued SuperSport United’s bid to avoid relegation continues on Saturday when they travel away for a crucial clash against Cape Town City at the ...
Sport
4 years ago

Were Kaizer Chiefs ever on the right track in the 2017-18 season‚ or were the cracks just being papered over‚ and exposed in all their gaping ...
Sport
4 years ago