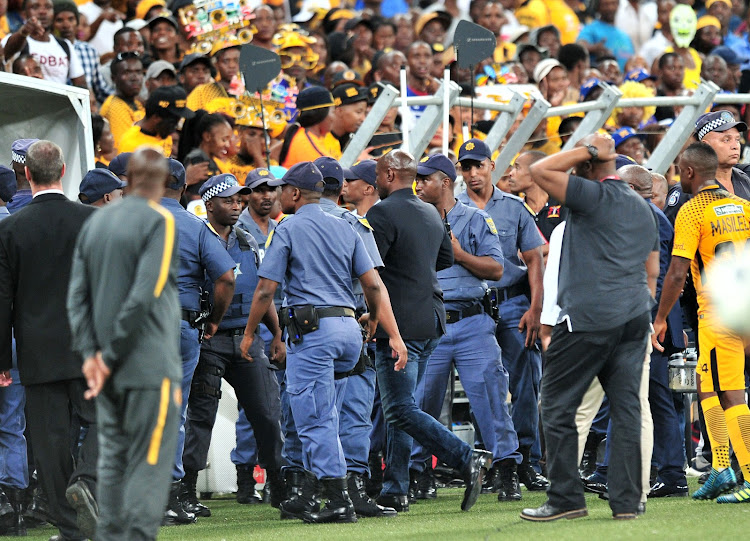 Kaizer Chiefs head coach Steve Komphela leaves the pitch after his team bombed out of the Nedbank Cup on Saturday.
Image: Samuel Shivambu/BackpagePix

Steve Komphela quit as coach of Kaizer Chiefs just minutes after violent scenes followed his side’s departure from the Nedbank Cup on Saturday as Free State Stars beat them 2-0 in their semifinal.

“We have to cut this culture of ill-discipline and delinquency. I have to be responsible and protect the players and administration, and set an example that this must stop,” said Komphela.

A security guard is reportedly fighting for his life after being badly injured when Kaizer Chiefs fans rioted after the loss to Free State Stars at the Moses Mabhida Stadium in Durban on Saturday night.

“If it has to stop with me, then it must be so ... I am effectively saying to you that I consider it my responsibility to protect everybody at stake.”

The club’s football manager, Bobby Motaung, added: “There has to be a reality check. We are not safe. We must take responsibility and own up and accept the facts. We have always honoured [our] obligations.

“We have had discussions with the coach and said, let’s do the honourable thing. The coach is stepping down with immediate effect.”

Komphela said football was about results and he was confident he was leaving Chiefs with a framework for the future.

A security guard was badly beaten, a ball boy and several other spectators injured and millions of rands of damage sustained as angry Kaizer Chiefs ...
Sport
3 years ago

Violence erupted at the end of Kaizer Chiefs' 2-0 Nedank Cup defeat against Free State Stars at Moses Mabhida Stadium in Durban on Saturday night as ...
Sport
3 years ago

“We didn’t deserve the result but it’s part of football,” he said. “We committed two errors and we paid the price. There was no major threat. We never had problems except when we lost possession and they came on counter-attack.

“I lost count of the number of chances ... I cannot fault the players – they gave their all. We did commit mistakes.”

Komphela slated the violence that followed the defeat in Durban. Several people were injured when hooligans ran onto the field and vandalised the stadium.

“At the back of this, do you still want to put people at risk? Do you want to put players at risk? I’ve got to be honest, I love dicing with fire but the culture of the club is such that we are very peaceful.

“We faced this [violence] in Joburg and now in Durban, and we are playing against Arrows here on Tuesday. I have taken all of this into consideration.”

The arbitration at the South African Football Association (Safa) by the Premier Soccer League (PSL) against Cape Town City for signing a sponsorship ...
Sport
3 years ago

Sundowns close in on the league title after brushing Arrows aside

It’s becoming a matter of when and not if Mama will give Mamelodi Sundowns and their fans the signal to collect their eighth Premier Soccer League ...
Sport
3 years ago

Mamelodi Sundowns will take a pragmatic approach in their last four Absa Premiership matches of the season.
Sport
3 years ago

Kaizer Chiefs have been charged by the Premier Soccer League (PSL) for the fan unruliness that followed their 3-0 defeat against Chippa United at FNB ...
Sport
3 years ago