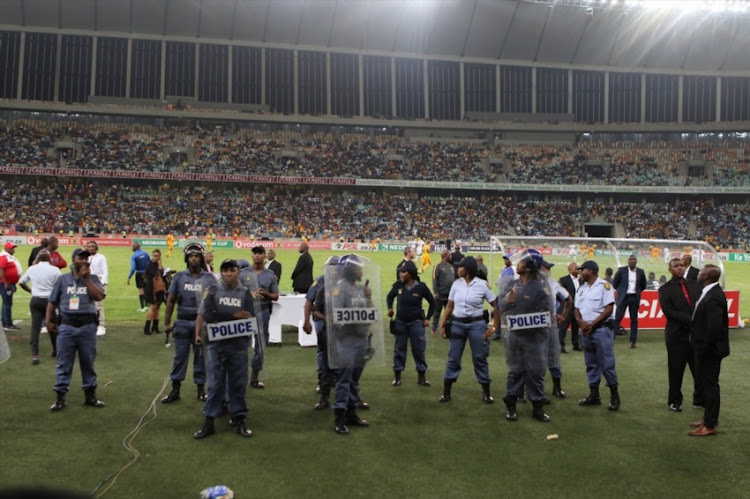 South African football woke up with a massive hangover and a credibility crisis on Sunday morning after the display of lawless violence and destruction that followed Kaizer Chiefs’ Nedbank Cup semifinal defeat at the Moses Mabhida Stadium in Durban.

A security guard‚ reportedly a woman‚ was fighting for her life in hospital after being set upon by a group of rioting fans in full view of the stadium. Much of the attack was captured by spectators and posted on social media.

She was repeatedly punched and kicked. After she fell to the ground, a man dressed in khaki trousers and black shorts hit her with part of the speaker system‚ which had been destroyed as rioters ran onto the field and broke everything in sight.

An estimated R5-million in damage was done to expensive audiovisual equipment‚ including a camera belonging to the SABC that was set on fire.

There was also damage reported to cars outside‚ the plastic seating and advertising hoardings after fans, angered by Chiefs' failure to make the final, invaded the pitch on the final whistle.

A security guard is reportedly fighting for his life after being badly injured when Kaizer Chiefs fans rioted after the loss to Free State Stars at the Moses Mabhida Stadium in Durban on Saturday night. Chiefs coach Steve Komphela resigned in the aftermath of the violence. Subscribe to TimesLIVE here: https://www.youtube.com/user/TimesLive

There were also other injuries‚ including a young ball boy traumatised by the wanton destruction around him.

Police and security guards failed to hold back the invaders‚ questioning again the effectiveness of security at high-profile domestic matches.

Clubs are forced by the Premier Soccer League to spend heavily on match security but rarely does this system prove effective when put to the test.

The police drove a single riot vehicle onto the side of the pitch‚ behind Chiefs’ bench‚ towards the end of the game when people in the crowd began to throw missiles in the direction of Amakhosi's embattled coach Steve Komphela.

In-crowd stewards should have moved quickly to eject those perpetrators, but that did not happen and the rain of objects increased as the game headed to a close.

Steve Komphela quit as coach of Kaizer Chiefs just minutes after violent scenes followed his side’s departure from the Nedbank Cup on Saturday as ...
Sport
4 years ago

On the final whistle, everyone on the field, including police officers, fled down the tunnel‚ allowing the invaders to set about trashing everything they could reach – including the large audio speakers and television cameras.

Much of the chaos was caught on social media and there would be enough evidence to trace‚ identify and arrest those involved should the police call for public assistance.

But‚ as seen repeatedly in the past‚ the sense of moral outrage after such incidents at domestic games quickly washes away.

After similar acts of violence at Loftus Versfeld in Pretoria more than a year ago – when Orlando Pirates fan ran amok and a rival supporter was beaten in similar circumstances – no perpetrators were punished.

Dwindling crowds have long been a problem for the PSL‚ ever more so in recent years. Saturday’s images will further discourage people from attending games.

There is now a credibility crisis brewing that could get much worse for the PSL if sponsors begin to pull out because they do not want to be associated with such scenes.