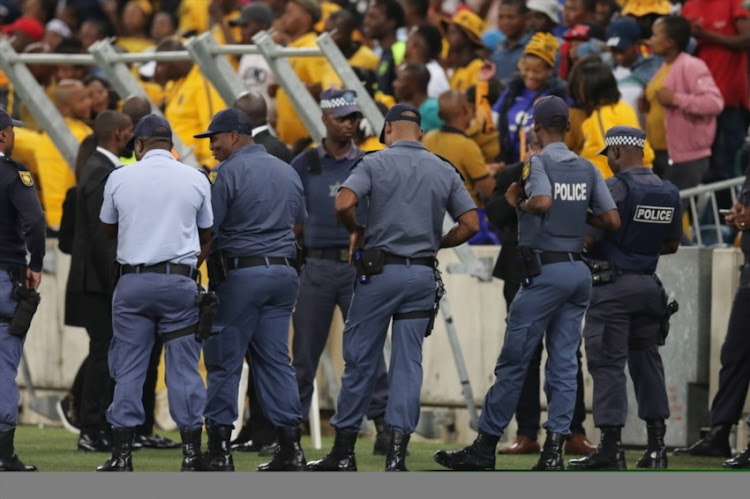 Two people have been arrested in connection with the unrest that flared up at the Moses Mabhida Stadium in Durban after soccer club Kaizer Chiefs lost to Free State Stars on Saturday night.

“Two suspects aged 27 and 33 were arrested for public violence and malicious damage to property‚” said Captain Nqobile Gwala on Sunday.

The pair would appear in the Durban Magistrate’s Court on Monday.

Gwala said angry fans had stormed the field‚ hurled objects onto the pitch and even started a fire at the stadium.

“Police were forced to use stun grenades to disperse the unruly crowds‚” Gwala said.

A security guard‚ a ball boy and several spectators were among those injured.

The damage to the stadium and technical equipment belonging to broadcasters is said to amount to millions‚ with some equipment alleged to have been stolen. Two vehicles that were parked at the back of the stadium were also damaged.

A small band of Free State Stars supporters were also attacked but managed to get to safety after their club’s general manager‚ Rantsi Mokoena‚ went to their rescue.

At least two hours after the final whistle the pitch was littered with debris as the two teams delayed their departure from the venue until the majority of spectators had been cleared from the precinct.

PSL spokesman Lux September condemned the “lawless violence” but a full statement from the league is expected later.

A security guard is reportedly fighting for his life after being badly injured when Kaizer Chiefs fans rioted after the loss to Free State Stars at the Moses Mabhida Stadium in Durban on Saturday night. Chiefs coach Steve Komphela resigned in the aftermath of the violence. Subscribe to TimesLIVE here: https://www.youtube.com/user/TimesLive