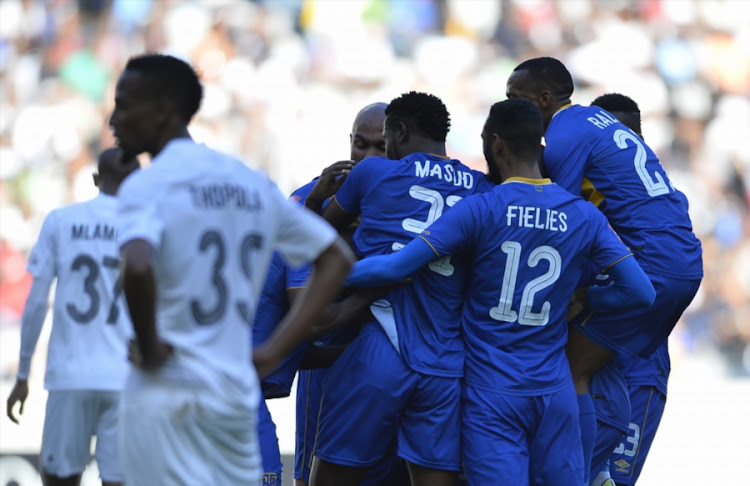 The Cape Town Stadium again proved an arena of undoing for Orlando Pirates yesterday (Saturday) as they lost for a third time in the last three months at the venue, with their remote title hopes also ending as Cape Town City beat them 1-0 on their penultimate day of the season.

Ayanda Patosi scored the only goal 10 minutes before half-time as City beat the Buccaneers for a second time in two months, having scored a similar result in the Nedbank Cup.

Pirates also lost 3-0 to Ajax Cape Town at the same venue earlier in the year.

Pirates had seven wins from last eight matches and still a small chance of taking the title race to last match day but were undone by a growing bogey.

Patosi, who has had his disciplinary problems this season, showed his undoubted talent with a brilliant volleyed strike after Lyle Lakay set him with a pass off the chest.

Pirates had to win to stand any chance of keeping their remote title hopes alive and certainly were full of attacking intent and Thabo Qalinge struck the woodwork and had a strike disallowed.

But they were laboured in the build-up and at the end could have been caught several times by City on the counter before both teams seemed to run out of energy in the closing stages.

Qalinge came into the line-up for the injured Augustine Mulenga and with Luvuyo Memela looked to be crafty and set up chances but found it hard to get past City’s reliable defensive pairing of Taariq Fielies and Robyn Johannes.

Fielies did clearly handle the ball in the 28th minute and Pirates should have been awarded a penalty, but their appeals were inexplicably turned down by referee Kulasande Qonqgo.

Seven minutes later City, who had not managed any shots at goal, were in the lead as Ayanda Patosi hit a superb shot from outside the area in the corner of the net. Lyle Lakay set him up for the goal to given City the half-time lead.

Pirates came close to an equaliser on the stroke of half-time when they cut the defence with a square pass only for Mpho Matsi to make a goal-saving tackle.

Qalinge hammered the post with a shot at the end of a corner in the 68th minute and with seven minutes to go broke through with only the goal keeper to beat but was denied by Sage Stephens’ save.