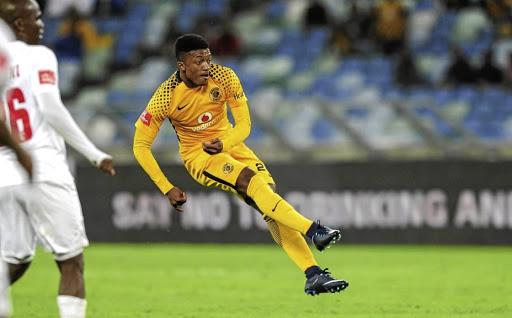 Gustavo Paez and Dumisani Zuma goals helped a wounded Kaizer Chiefs repair some of its dented pride as they beat an on-form Maritzburg United in a penultimate third spot Absa Premiership scramble at an almost empty FNB Stadium yesterday afternoon.

That less than 2000 Chiefs supporters bothered to show up to support their team summed up what has been tragic season for the once mighty Amakhosi.

The home crowd numbers must have been the second worst this season, one notch ahead of the crowd that pelted former coach Steve Khomphela with all sorts of missiles after seeing Chippa routing their team 3-0 here in what was another hugely embarrassing defeat for Amakhosi on April 7.

Paez’s opening goal, a thumping shot taken just outside the area, was a third one against the Team of Choice this season as he also scored a brace against the same team when they met at Harry Gwala Stadium in September.

Zuma who came on for Paez in the second stanza beat Bongani Mpande in Maritzburg goals with a delightful lob to score his third goal of the season.

Ahead of this match Amakhosi, who replaced Maritzburg on the third spot with this win, had claimed just 19 points from 14 home matches this season.

While Chiefs had come to this match on the back of a 3-1 midweek defeat against Golden Arrows in what was Patrick Mabedi’s first match as caretaker coach following Komphela’s resignation after the Stars defeat and all the ugly riots that ensued in Durban after that match, Maritzburg were on a high after two excellent league and cup results against Mamelodi Sundowns in Pietermaritzburg.

Mabedi, who discarded Khomphela’s 3-5-2 for the 4-4-2 formation, made three changes to the team that lost to Arrows, slotting in Paez in the place of Leonardo Castro who was shown a red card for  a borne-crunching foul against Arrows. Siyabonga Ngezana also got a nod ahead of Eric Mathoho while Sibusiso Khumalo had his first start this season at left back in the place of Tshepo Masilela.

With young industrious midfielder Siphesihle Ndlovu, Mxolisi Kunene and number one goalkeeper Richard Ofori missing this match because of suspension, Fadlu Davids’ side was hugely depleted and were always expected to struggle in this matchgiven their limitation in depth and resources.