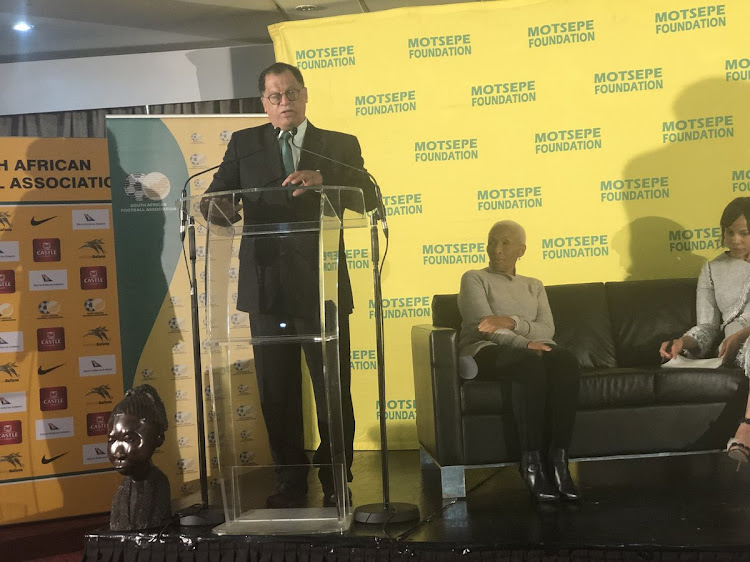 SA Football Association (Safa) president Danny Jordaan speaks to the media during the launch of the ABC Motsepe League launch for the national playoffs at Safa House in Soweto on Wednesday May 9 2018.
Image: Safa.net via Twitter

TimesLIVE reported earlier this week that Sports Minister Tokozile Xasa was not happy with recent quotes attributed to Jordaan that said Safa would back the Moroccan bid.

The minister was very forthright and she said the South African government would not support Morocco’s bid to host the 2026 showpiece.

Cornered at Safa House on Wednesday‚ Jordaan said: “Safa has issued at statement and its position is very clear.

"We’re going to have an NEC meeting because these things are determined by the NEC not just individuals.”

Jordaan futher cleared Safa’s stance on this matter at the draw of ABC Motsepe League playoffs at Safa House‚ saying the NEC is the only body which would determine their position.

“The vote is on June 13 in Moscow and we will vote according to the mandate that we will get from the NEC‚” Jordaan said.

Safa’s vote has been seen as one of the most influential in Southern Africa and already Morocco and USA have come before their NEC to present their bids with close to a month before the crucial vote takes place.

Up to 207 of the 211 member federations will vote on June 13 in Moscow‚ with four of the bidding members excluded.

Morocco face stiff competition to win the right to host the World Cup which‚ if they win‚ would be a second time for Africa after South Africa hosted the 2010 event.

The Moroccans are up against USA‚ Mexico and Canada who are presenting a joint bid called United 2026.

On their ongoing feud with PSL chairman Irvin Khoza‚ Jordaan refused to comment on Wednesday‚ saying: “You’re not going hear from me.

"Go ask the police. I’m not a policeman.”

The South African government will not support Morocco's bid to host the 2026 Fifa Soccer World Cup.
Sport
4 years ago

Premier Soccer League (PSL) chairman Irvin Khoza has indicated that he does not want a war in football sparked by the allegations that were made ...
Sport
4 years ago

Premier Soccer League (PSL) chairman Irvin Khoza has said that Danny Jordaan’s allegations against him fit a pattern of conspiracy theories that the ...
Sport
4 years ago

Premier Soccer League (PSL) chairman Irvin Khoza has said he has no shares in Stadium Management South Africa (SMSA)‚ and has never had an interest ...
Sport
4 years ago