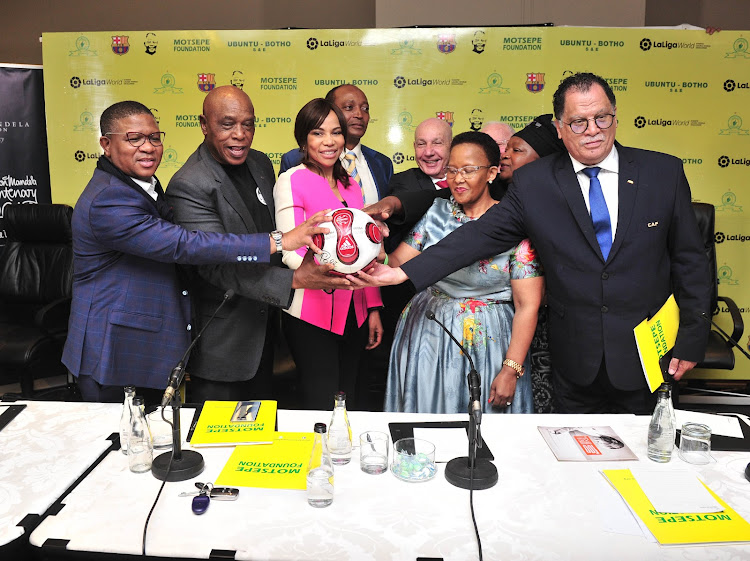 Barcelona have undertaken to bring their best stars to South Africa to play against Mamelodi Sundowns in the now-confirmed friendly match at FNB Stadium on Wednesday‚ Downs president Patrice Motsepe has said.

In the announcement on Thursday at Sandton Convention Centre to confirm the much-talked about match-up Motsepe indicated that Barcelona will bring a full-strength team‚ along with 100 top officials from the club.

Let’s do this Masandawana! We welcome the Spanish Champions next week! Who’s joining us?
➖#Sundowns #DownsBarca pic.twitter.com/mNLLhwu6ZE

That means one of the world’s two best footballers at present‚ forward Lionel Messi‚ should make a return to South Africa where he competed for quarter finalists Argentina at the 2010 World Cup.

“That’s partly why we had to give them a little bit more time [in the organisations for the game] to make sure that – and as I said‚ this is the year of the World Cup [in Russia] – we get the very best‚” Motsepe said.

“And that is the undertaking that we have received. So indeed it is the very‚ very best. Because it’s very important.

“... It’s also important that in terms of our arrangements and specifically agreements that we have we’ve got to mention those specific players‚ as we’ve done in the past.”

Pressed further on whether he knows of any particular players who will not be able to make the trip‚ Motsepe said such information was confidential.

“There are issues that we may not disclose. Safe to say that there is going to be a delegation of close to 100 coming from Barcelona‚ and it will include the most senior leadership of Barcelona.

“Are there specific players who are not coming‚ again there’s confidentiality in terms of this one‚ but what I can tell you is that the first time they came [to play Sundowns] in 2007 the contract said specifically that Messi could not come because of an injury.

So apparently Barca are coming pic.twitter.com/SGDNsJl0do

Barcelona‚ according to their website‚ are scheduled to arrive on Tuesday.

Among other global superstars in their lineup are the Spain trio of Gerard Pique‚ Sergio Busquets and Andre Iniesta who played in their country’s 1-0 2010 World Cup final victory against Netherlands at FNB.

Luis Suraez‚ a star for Uruguay when they beat Bafana Bafana at the 2010 World Cup and went onto the semifinals‚ and French starlet Ousmane Dembele‚ should also make the trip to South Africa‚ according to the assurance made by Motsepe.

CONFIRMED: Barcelona are coming to SA to play against Sundowns

The much-talked about friendly match between Mamelodi Sundowns and Barcelona was announced as being officially going ahead in a heavy-hitting press ...
Sport
3 years ago

South Africans showed an amazing appetite for the marquee international club friendly between Mamelodi Sundowns and FC Barcelona after it emerged on ...
Sport
3 years ago

Sports Minister Tokozile Xasa has warned the organisers of the high-profile international club friendly between Mamelodi Sundowns and Spanish ...
Sport
3 years ago

The high-profile friendly between Mamelodi Sundowns and Barcelona on May 16 will be about much more than the action on the pitch with dignitaries ...
Sport
3 years ago