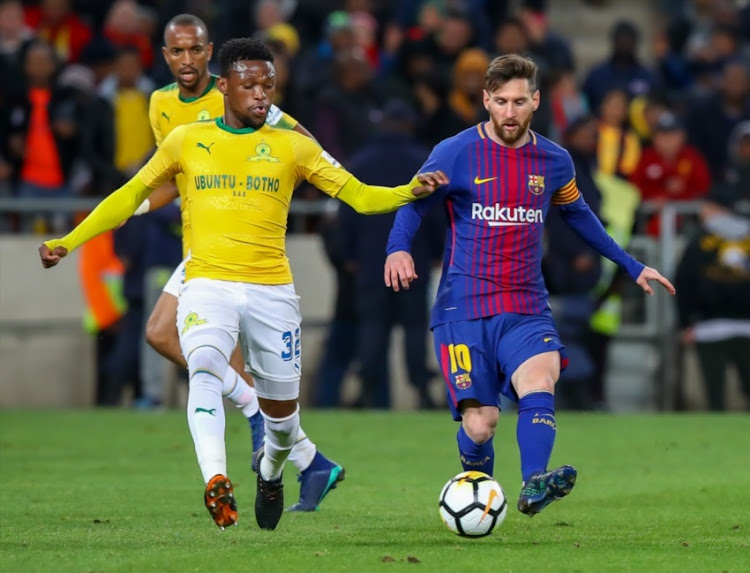 Mojeka Madisha of Mamelodi Sundowns tries to get the ball away from Lionel Messi of Barcelona during the international club friendly match between Mamelodi Sundowns and Barcelona FC at the FNB Stadium on Wednesday evening.
Image: Gordon Arons/Gallo Images

Barcelona flew into South Africa in the morning‚ beat Mamelodi Sundowns 3-1 in the Nelson Mandela Centenary Cup at the FNB Stadium‚ and jetted out that same night having left their indelible stamp of class on the country in Wednesday's fantastically fun friendly match.

If this friendly were a movie‚ it would not have won an Oscar - but it was as frenetic and wildly entertaining as any one of the Fast and the Furious series.

Lionel Messi appeased the crowd with a late substitute appearance‚ but it was the goals of Ousmane Dembele in third minute‚ Luis Suarez in the 19th‚ and Andre Gomes in 67th that earned Barca victory. Sibusiso Vilakazi pulled a well-earned strike back for Sundowns in the 76th.

Not that the result counted for much. 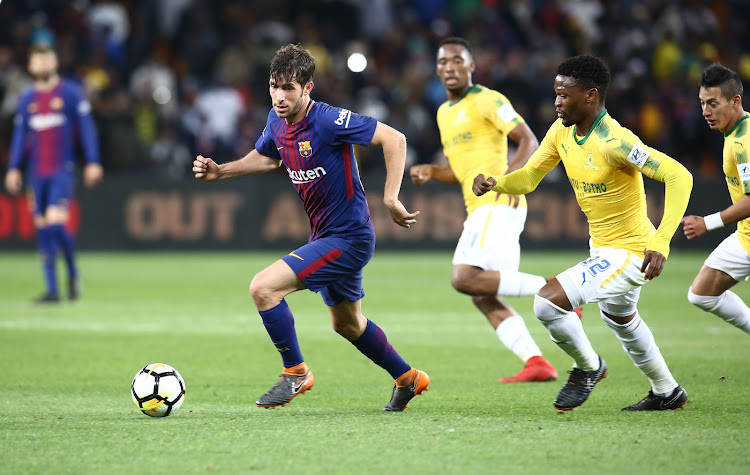 Sergi Roberto of FC Barcelona in action during the Nelson Mandela Centenary Challenge at the FNB Stadium on Wednesday.
Image: Masi LosiMasi Losi

A 78‚000-strong crowd at an FNB Stadium sparkling with cellphone lights froze in Arctic temperatures but were warmed by the spectacle of Barcelona on the pitch‚ slugging it out with Sundowns.

How much can one read into a virtual exhibition match for which Barcelona flew in first thing in the morning‚ flew out straight after, and which was sprung as a surprise as much on Sundowns and their coach Pitso Mosimane as it was on Barca?

Of course very little. But it was was definitely enjoyable watching Downs pit themselves against the global superstars of Barcelona‚ even in two completely changed mixed-strength XIs put out by Barca coach Ernesto Valverde either side of half time.

What could be learned from the end-to-end football - mostly in the direction of Denis Onyango in Sundowns' goal‚ but the other way too - was that Downs‚ as they found out at the 2016 Club World Cup‚ do not have a credible defence at this level. But they do have an attack that can trouble the best.

Sundowns' nightmares in defence started from the third minute when Soumahoro Bangaly - known for such horrible blunders - passed the ball from in front of his area straight to Demebele. The France starlet took the ball forward and, without having to think about it, cracked a finish past Onyango into the top-left corner with a clinical level at which a PSL striker could salivate.

That Sundowns would show skill and ingenuity in attack‚ and Percy Tau be central to that‚ was never in doubt. The little forward went one-on-one with Marc-Andre ter Stegen but‚ attempting a chip simply fed the Barca goalkeeper.

Just before 20 minutes‚ Luis Suarez played a one-two with midfield namesake Denis Suarez to canter through the non-existent defence. The Uruguyan ace finished low past Onyango.

From Tau's cross‚ Wayne Arendse got a head from a cluster of players that Ter Stegen tipped onto his bar.

Dembele was clear to lob Onyango‚ Hlompho Kekana scrambling back to clear off the line. 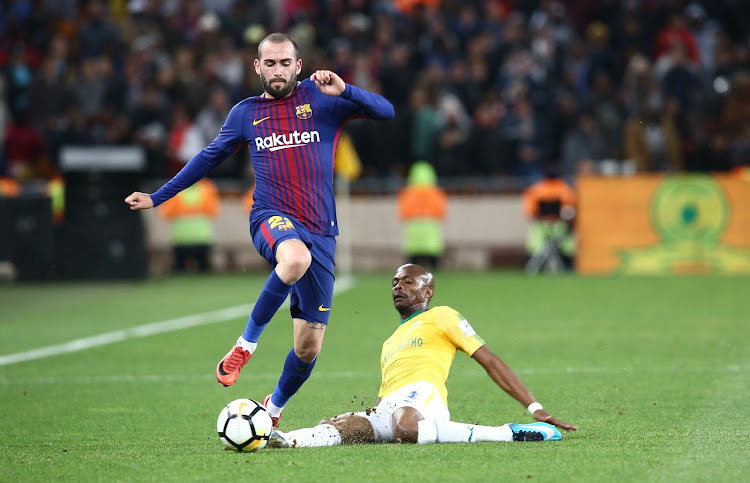 Towards the end of the half Dembele only had to turn on the pace to streak past Bangaly‚ and crossed for Denis Suarez to head onto the upright.

Tiyani Mabunda‚ from a Tau pass‚ struck into the side-netting.

Valverde brought all 11 of his 12 substitutes on after the break‚ except the one the crowd was baying for‚ Messi.

The occasion‚ and the pace of thinking of their opponents‚ brought out schoolboy errors from Downs‚ such as when captain Kekana passed across his own box and only found Ruiz de Galarreta to tee up Gomes for Barca's third.

In the 74th, Messi's eventual introduction raised the FNB roof.

But it was Tau's deft little ball through that put Vilakazi into the area to beat second-half Barca keeper Jasper Cillesen that brought out the evening's biggest roar. 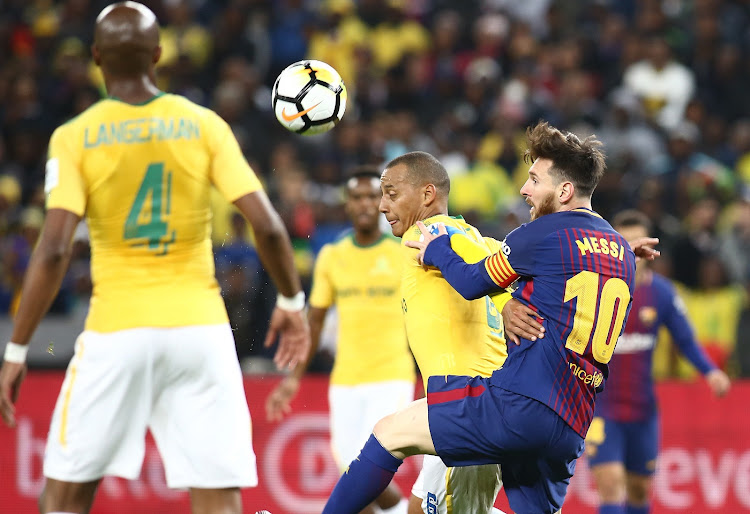 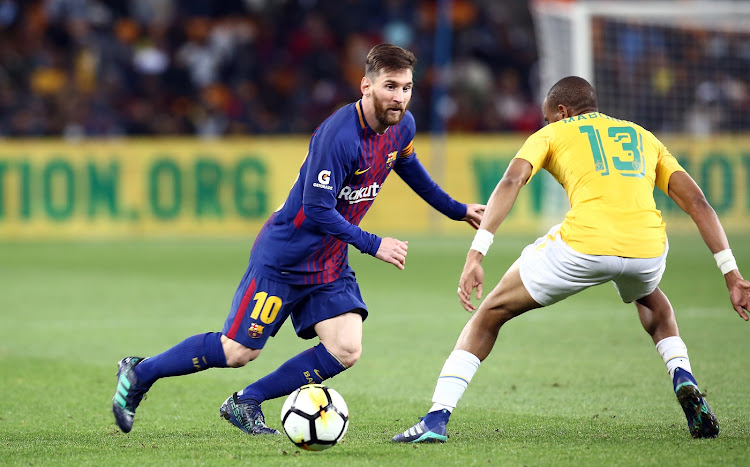 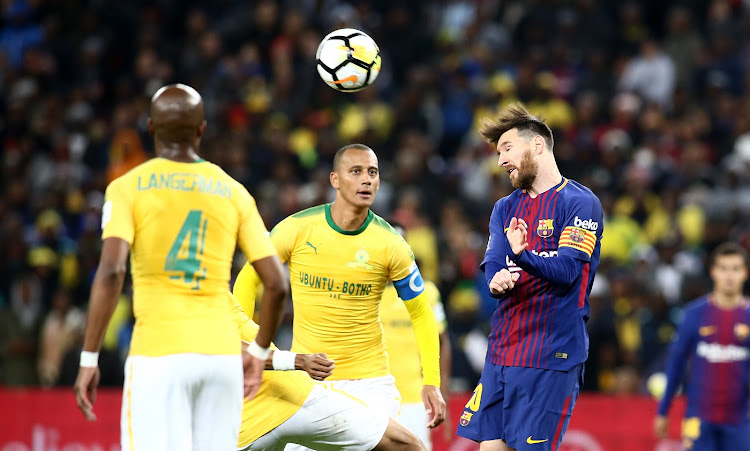