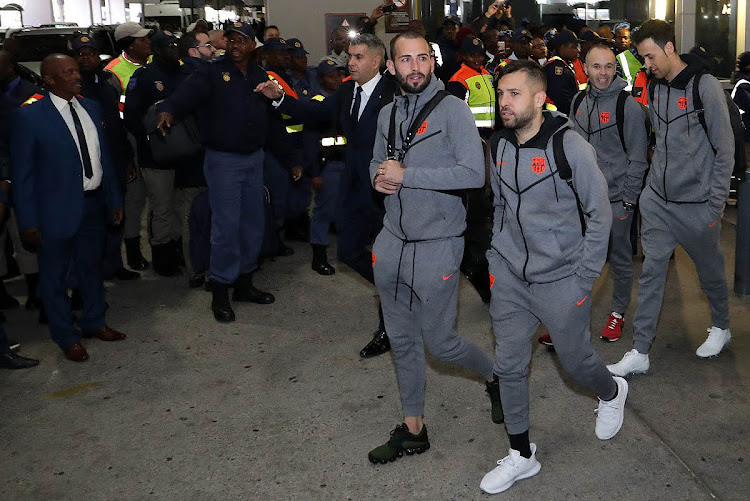 FC Barcelona superstars are ushered out of OR Tambo International Airport amid heavy police presence. The Spanish giants landed on Wednesday May 16 2018 and headed for their hotel in Sandton.
Image: Muzi Ntombela

This figure was revealed by the Spanish press, which reported that it excluded the costs for the chartered plane that left Barcelona on Tuesday night with business-class seating for the 21 players and the rest of the staff.

The cost of the trip to SA had been the subject of furious speculation for days. Some reports suggested that Motsepe paid about R105-million to convince Barcelona to come to SA.

Spanish league champions arrived to loud cheers at the OR Tambo International airport on Wednesday morning, May 16 2018, ahead of their friendly face off with Premier Soccer League champions Mamelodi Sundowns at FNB stadium.

Argentina superstar Lionel Messi’s involvement in the Nelson Mandela Centenary Cup encounter against Sundowns had also been the subject of fierce speculation and some doubted that he would make the trip to SA.

It has since emerged that Messi suffered an injury scare on Tuesday but still got on the overnight plane that brought the Barcelona squad into Johannesburg on Wednesday.

He did not train with the rest of the squad in the afternoon session at the Ciutat Esportiva‚ doing individual exercises instead‚ before they all left for the airport and the flight to South Africa‚ according to the Barcelona-aligned sports daily El Mundo Deportivo.

WATCH | Messi finally arrives in SA with his Barcelona colleagues

FC Barcelona have touched down at OR Tambo Airport in Johannesburg for their hugely anticipated Nelson Mandela Centenary Cup encounter against ...
Sport
4 years ago

Coach Ernesto Valverde said he did not want to take any risks with players ahead of the World Cup in Russia but travelled with a full-strength squad as required by the contract for the game against Sundowns.

The Barcelona jet was to sit at OR Tambo International Airport on Wednesday before taking off again for the return flight at midnight‚ with the Barca squad due back home at 9am local time on Thursday morning.

Only injured defender Samiel Umtiti‚ who is a French international of Cameroonian descent‚ and Belgian back Thomas Vermaelen were left behind.

Wednesday night’s Mandela Centenary Cup match between Mamelodi Sundowns and FC Barcelona will be beamed live on SABC 3‚ organizers of the event have ...
Sport
4 years ago

Barcelona were expected to put veteran midfielder Andres Iniesta at centre stage as he made his penultimate appearance for the club at the same venue where he had scored the winning goal in the 2010 World Cup final.

Iniesta is leaving Barca at the end of the season and after Wednesday’s game will feature for Barca for the last time in their final game of the La Liga season at home to Real Sociedad on Sunday.

A security operation will be mounted in and around FNB Stadium to ensure a safe atmosphere when the venue hosts the high-profile international club ...
Sport
4 years ago

The highly anticipated arrival of Spanish giants FC Barcelona has been delayed by about two hours and they are only expected to touch down at OR ...
Sport
4 years ago

It's official: Messi will face Sundowns as part of full strength Barca squad

The wait is finally over after FC Barcelona confirmed on Tuesday night that Argentinean superstar Lionel Messi and Uruguay marksman Luis Suárez would ...
Sport
4 years ago