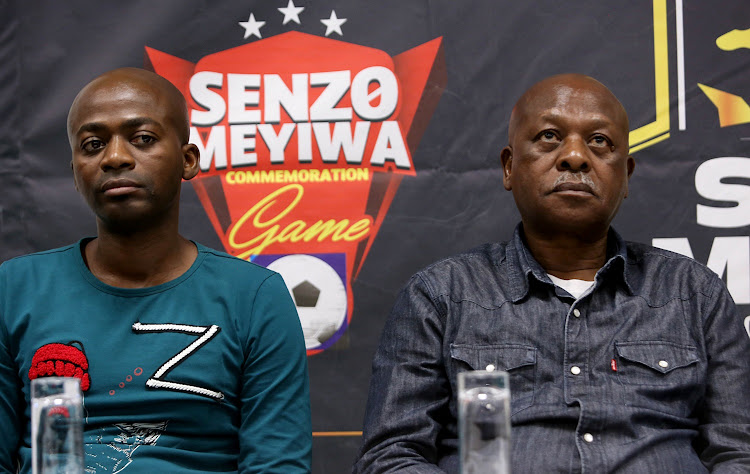 Slain Bafana Bafana and Orlando Pirates captain Senzo Meyiwa’s father has recounted how he got a chilling telephone call that his son had been shot and killed after he had watched him play against Ajax Cape Town a few hours earlier.

At first Sam Meyiwa did not believe the news he had just been told.

He then realised that he had tried to call Senzo after the Premier Soccer League (PSL) game between Pirates and Ajax‚ but he did not answer his phone as he usually did.

He was told that after the match when all players went to the change-rooms to change their clothes‚ Senzo had sat down alone in the corner with his head down before other players told him they were leaving.

The Premier Soccer League (PSL) awards will be held on Tuesday‚ May 29 at the Sandton Convention Centre‚ the league has announced.
Sport
4 years ago

This was revealed by Meyiwa on Thursday during the launch of the Senzo Meyiwa commemoration game in Durban to honour the legacy of the talented goalkeeper.

The game‚ which will involve former and current PSL players‚ will take place on June 9 at King Zwelithini Stadium in Umlazi.

The commemoration game is spearheaded by Ntokozo Sikhakhane of Youth Camps and Nathi Ngwenya of the Nathi Ngwenya Holdings‚ who said they had received the family’s blessing to host it in memory of the later goalkeeper.

The proceeds from the game‚ which the organisers hope will become an annual event‚ will be channelled towards assisting Senzo’s family to unveil his tombstone and to set up the Senzo Meyiwa Foundation.

Senzo’s younger brother‚ S’fiso Meyiwa‚ said he was “humbled and excited at the same time for this great initiative and that all soccer loving people in South Africa are as excited as I am”.

He said the Senzo Meyiwa Foundation was at an advanced stage of being set up and that it will become the mouthpiece of the Meyiwa family.

“The foundation will look after Senzo Meyiwa’s legacy as a soccer player‚ starting with the commemoration game‚” he said.

The foundation will also include programmes such as driving development of soccer talent in Senzo’s home province of KwaZulu-Natal‚ tackling the welfare of soccer players and looking after the family‚ especially Senzo’s children.

Barcelona coach Ernesto Valverde said he was surprised by the speed of Mamelodi Sundowns‚ despite his team cruising to a relatively comfortable 3-1 ...
Sport
4 years ago

S’fiso said other programmes may be included depending on funding and sponsorships.

He thanked the eThekwini Municipality‚ the KwaZulu-Natal provincial government and other stakeholders for their keen interest in supporting his late brother with a big send-off during his funeral.

“But now looking into the future as a family‚ we would like to call upon all possible stakeholders‚ partners and supporters to continue shining the light on my late brother.”

He also appealed to soccer supporters to come in their numbers and fill the stadium as they had during his brother’s funeral‚ which was held at Durban’s Moses Mabhida Stadium.

Meyiwa senior said he still woke up at night and looked at Senzo’s sports kit — a painful reminder that as family they never got a chance to celebrate his elevation as Bafana Bafana captain.

“It was painful because Senzo had been appointed as Bafana captain but we did not celebrate that as a family because he never got a chance to come back home and they killed him. But we’re leaving everything to God‚” he said.

Barcelona flew into South Africa in the morning‚ beat Mamelodi Sundowns 3-1 in the Nelson Mandela Centenary Cup at FNB Stadium‚ and jetted out that ...
Sport
4 years ago

Earlier in the week‚ Meyiwa told TimesLIVE that he had sent an sms to Police Minister Bheki Cele shortly after his appointment‚ expressing the hope that he would expedite the investigation into his son’s murder.

In March‚ Cele instructed national police commissioner General Khehla Sitole to give him a “thorough briefing on whether the new task team is doing a proper job”.

Cele was not available for comment on the latest developments in the investigation.

The Pirates goalkeeper tragically died aged 27 when he was killed during a suspected botched robbery at his girlfriend‚ pop singer Kelly Khumalo’s home in Vosloorus‚ east of Johannesburg‚ on the night of October 26‚ 2014.

He was killed in the presence of Khumalo‚ her mother‚ her sister Zandi‚ Zandi’s boyfriend‚ Longwe Twala‚ Meyiwa’s friends‚ Mthokozisi Twala and Tumelo Madlala‚ and Khumalo’s four-year-old son Christian.

But four years later‚ police are yet to make an arrest in connection with the murder that sent shockwaves throughout the local and international soccer community. There have been mounting allegations of “a cover-up” on the police investigation.

In February Longwe Twala‚ the son of music veteran Chicco Twala‚ and Zandile Khumalo took to media platforms to air their side of the story.

Twala appeared on Metro FM to address allegations that he was the triggerman after a parody account‚ @AdvBarryRoux‚ made the claim on Twitter.

Zandile told Ukhozi FM that Senzo‚ her sister Kelly‚ her mother‚ and the others were eating at the table when “people stormed the house”.

Zandi Khumalo on Senzo murder: Police would've arrested us if we were suspects

"We are also victims in all of this," says Zandi Khumalo.
TshisaLIVE
4 years ago

He's back and he wants the murder case of soccer star Senzo Meyiwa to be cracked immediately.
News
4 years ago

Kelly Khumalo’s sister‚ Zandi‚ who was present when the late Bafana Bafana goalkeeper Senzo Meyiwa was killed‚ has described the happiness and joy ...
TshisaLIVE
4 years ago