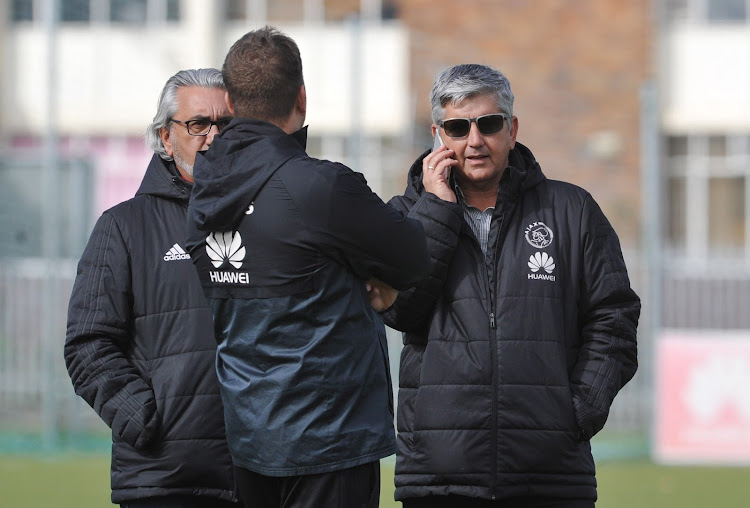 This was after Ajax tweeted on Thursday evening that Efstathiou had been at Cape Town International Airport‚ ready to fly to Johannesburg to appear on ‘Thursday Night Live with Marawa’.

Ajax said the CEO was then called by producer Sifiso Mbambo and informed he had been withdrawn from the show.

Mbambo said Efstathiou’s appearance was cancelled because the producer did not have time to arrange for other involved parties in the Tendai Ndoro eligibility matter‚ which has seen points deducted from Ajax resulting in their relegation from the Premier Soccer League (PSL)‚ to also appear.

Ajax CT CEO Ari Efstathiou - waiting to board flight to JHB to appear on Thursday Night Live with Marawa - only to be informed by Sifiso Mbambo, Supersport Producer, that he has been withdrawn from the show.

People will be denied the true story of the #Ndoro matter. pic.twitter.com/a7EcyVj7H9

“I spoke to both parties – Robert and Ari – in this regard‚ and the way that I presented the case to Ari is simple‚” Mbambo said.

“I said: ‘If I offer you a platform without Safa and the PSL and the person who made the judgment‚ it would be one-sided’.

“So then he feels that he is being denied.

“For us to pull the story through we need these other stakeholders. If there’s only one‚ then what are we doing?”

Ajax had posted a tweet on their official Twitter page that suggested the cancellation of Efstathiou’s appearance on the show was for reasons of gagging the truth.

The text appeared above a photo image of a man gagged.

Soon after tweeting that Efstathiou would not appear on Marawa’s television show‚ Ajax posted another announcement on Twitter that the club’s CEO would appear on Thomas Mlambo’s Thursday evening MetroFM radio Ultimate Sport Show.

Ndoro’s eligibility matter‚ regarding a Fifa rule that a player may not turn out for more than two clubs in a season‚ was ruled against Ajax by Safa arbitrator William Mokhari.

Ajax have gone to the Johannesburg High Court seeking an interdict halting the PSL’s promotion-relegation playoffs pending an appeal.

Barcelona against Mamelodi Sundowns was like the Rand to the Euro‚ was how Downs coach Pitso Mosimane wittily described his team’s 3-1 defeat‚ and he ...
Sport
3 years ago

Barcelona coach Ernesto Valverde said he was surprised by the speed of Mamelodi Sundowns‚ despite his team cruising to a relatively comfortable 3-1 ...
Sport
3 years ago

REVEALED: Why Sundowns players did not tackle Messi and his Barcelona teammates

Mamelodi Sundowns noticeably did not get stuck into Barcelona in the physical challenges on Wednesday night.
Sport
3 years ago

Barcelona flew into South Africa in the morning‚ beat Mamelodi Sundowns 3-1 in the Nelson Mandela Centenary Cup at FNB Stadium‚ and jetted out that ...
Sport
3 years ago

WATCH | Messi finally arrives in SA with his Barcelona colleagues

FC Barcelona have touched down at OR Tambo Airport in Johannesburg for their hugely anticipated Nelson Mandela Centenary Cup encounter against ...
Sport
3 years ago