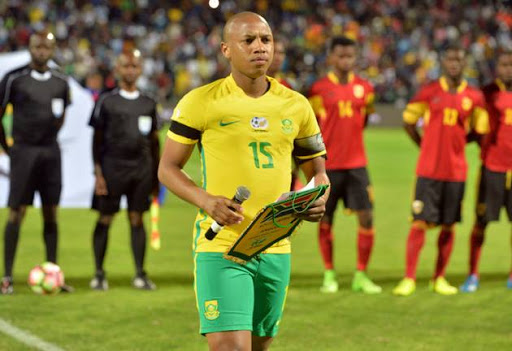 Former Orlando Pirates midfielder Andile Jali is at advanced stages in talks to join Mamelodi Sundowns. The Bafana Bafana midfielder is a free agent after his contract with Belgian club Oostende came to an end after four and half years in the Jupiler League.
Image: Lefty Shivambu/Gallo Images

Mamelodi Sundowns coach Pitso Mosimane has revealed that free-agent Andile Jali is “very close” to signing for the League champions and that the ball is now in the Bafana Bafana midfielders’ court to make a decision.

Jali’s contract with Belgian club Oostende was terminated last month after almost four-and-a-half seasons in the Jupiler League and it seems Sundowns will beat his former team Orlando Pirates and Kaizer Chiefs to the hard tackling midfielder’s signature.

Talks to bring Jali to Chloorkop are at an advanced stage and Mosimane said it was only a matter of time before Sundowns make an official announcement.

Mamelodi Sundowns coach Pitso Mosimane has said that he is scheduled to meet with Andile Jali‚ the Bafana Bafana midfielder whose agent Mike Makaab ...
Sport
4 years ago

“Yes there is progress.

"We are really talking to Jali now and we are very close‚” said Mosimane at the Premier Soccer League’s Awards ceremony in Sandton on Tuesday night after winning the Coach of the Season award.

“To be honest it’s up to him to sign.

“So we have reached a good level and a good point of understanding with him‚” Mosimane said.

Mosimane has never hidden his desire to sign the 28-year-old since the player’s representatives made it clear that the player had decided to come back home after nearly five seasons in Europe.

Sundowns are in the group stages of the Caf Champions League and will aim to defend their Absa Premiership title when the new league campaign gets underway in early August.

“He’s got the right attitude for football‚" Mosimane said.

"You know him‚ he is stubborn‚ he fights‚ he is a bull terrier and he’s got the right tempo to play in the Caf Champions League.

“He’s played international football and he’s playing for Bafana‚ so he understands all these things.”

But the Sundowns coach cautioned that Jali would have to be prepared to fight for his place against regular starters Hlompho Kekana‚ Tiyani Mabunda and Oupa Manyisa in midfield.

“So Jali has to understand that and he understood that‚" he said.

“He understands that if he comes here he still has his buddy Manyisa and we still have Kekana‚” said Mosimane.

Siphesihle Ndlovu has credited his Maritzburg United coach Fadlu Davids with his nomination for the Premier Soccer League Footballer of the Season ...
Sport
3 years ago

Bloemfontein Celtic say reports that the club has already been sold to a Kimberley businessman are “untruthful and misleading”‚ according to a ...
Sport
3 years ago