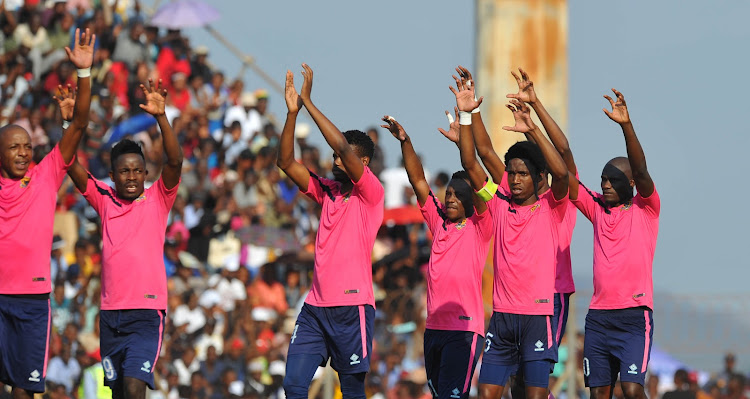 A heaving Thohoyandou Stadium roared Black Leopards back into the Premier Soccer League for the first time in a half-decade with the Limpopo team's dramatic 1-0 promotion-relegation playoff win against Jomo Cosmos on Wednesday.

Leopards went to an unassailable eight points to guarantee the Limpopo team's return to the top flight.

The remaining game between Cosmos and already-relegated Platinum Stars‚ both on two points‚ at Vosloorus Stadium on Saturday is academic as neither can win the group to either be promoted or steer clear of relegation.

Leopards won in front of a packed Thohoyandou Stadium‚ their supporters out in force hoping to view their team's return to the PSL first-hand.

The final whistle produced stirring scenes of celebration on the pitch and in the stands.

Leopards have ‘no room for sentiment’ if they relegate Stars

Black Leopards players have been training under lights in preparation for their crunch Premier Soccer League (PSL) promotion-relegation playoff ...
Sport
3 years ago

Leopards had spent five years in the National First Division (NFD)‚ during which time they perennially reached the promotion playoffs and fallen at that last hurdle.

They had spent nine seasons in the PSL before their relegation as the last-placed team in 2012-13.

Platinum Stars reached the playoffs finishing second-last in the PSL‚ though only after Ajax Cape Town had points deducted over the Tendai Ndoro eligibility saga.

The crowd was a factor in a focused‚ keyed up Leopards muscling past Jomo Sono's Cosmos.

But Lidoda Duvha‚ structured by prominent Limpopo coach Joel Masutha and spearheaded by their big Zambian striker Mwape Musonda‚ have also just been the best of the three teams in the playoffs.

Relegation threatened Platinum Stars may be staring down the barrel of a loaded gun but beleaguered coach Roger de Sa is refusing to throw in the ...
Sport
3 years ago

If anything the pressure resulted in a somewhat nervy display from Leopards on Wednesday‚ though in the end they did enough for a solid victory.

Cosmos‚ in the second half especially‚ made Leopards fight for their promotion.

Leopards scored the goal that produced a roar from the crowd that shook Thohoyandou when Musonda's cross from the left found Karabo Tshepe free of his markers to strike a first-time volley past goalkeeper King Ndlovu.

Cosmos had a golden opportunity to equalise almost immediately when‚ three minutes later‚ Tebogo Makobela's shot was deflected into the path of Sphesihle Nzimande‚ all alone in space on the left‚ who skewed a shot wide when it would have been easier to hit the target.

A minute before the end of the half Marks Munyai's run down the right drew Ndlovu out of his goalmouth‚ as the influential Leopards right-back crossed to find Tshepe‚ Cosmos centreback Thato Lingwati scrambling a challenge to deny a certain second.

Leopards tried to press home the advantage at the start of the second half‚ Munyai blasing over from a promising position.

Centreback Khomotso Masia headed a lot closer from a corner.

Leopards goalkeeper Rotshidzwa Muleka produced an excellent 64th-minute save to keep out Nzimande's header‚ and his team in the lead.

Cosmos‚ as could be expected from a team playing for a place in the PSL‚ gave everything‚ and their late resurgence made for an awkward last half-hour for Leopards and their superb crowd.

Ultimately‚ though‚ Leopards contained them.

And two spectacular late saves by Ndlovu denied the home team a 90th-minute doubling of the scoreline.

Mamelodi Sundowns coach Pitso Mosimane has revealed that free-agent Andile Jali is “very close” to signing for the League champions and that the ball ...
Sport
3 years ago

The Premier Soccer League awards will be handed out on Tuesday night‚ honouring those players‚ coaches and match officials who excelled in the ...
Sport
3 years ago