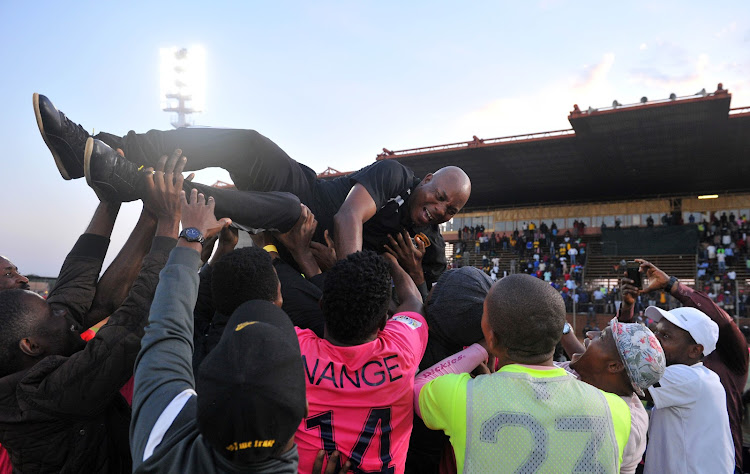 Joel Masutha coach of Black Leopards being held up high during the National First Division Promotion Playoffs on 30 May 2018 at Thohoyandou Stadium.
Image: Sydney Mahlangu/BackpagePix

Newly promoted Black Leopards will surely raise eyebrows in the coming premiership season after it emerged that the players are allowed to make substitutions during matches and even overrule coach Joel Masutha.

Leopards players decided on a substitution in their recent promotional play-off against Platinum Stars when the club drew 2-2 in Rustenburg last weekend.

Masutha said he is friends with his players and he has given them the freedom to question his decisions‚ which in his view works for the team.

“We even discuss tactics‚" he said.

A heaving Thohoyandou Stadium roared Black Leopards back into the Premier Soccer League for the first time in a half-decade with the Limpopo team's ...
Sport
4 years ago

"Last week‚ I wanted to take out [Meshack] Maphangule and one of the players said to me‚ ‘Coach‚ can’t we sacrifice [Karabo] Tshepe?’

"I looked at it and I saw that the players were right.

"So that’s how close we are and it made everyone to feel free‚” Masutha said following their 1-0 win over Jomo Cosmos on Wednesday‚ which confirmed Leopards' promotion to the Absa Premiership.

He also had an interesting view on their 12th man – the supporters - who filled up the Thohoyandou Stadium.

“Our supporters have matured to be honest‚" he said.

"The way it was before and now….. there is a big difference.

"They were here to support and not to coach.

Leopards have ‘no room for sentiment’ if they relegate Stars

Black Leopards players have been training under lights in preparation for their crunch Premier Soccer League (PSL) promotion-relegation playoff ...
Sport
4 years ago

"They never even whistled to show that someone must be taken off‚ which is a big thing.

"They are our 12th player and I believe that next season is going to be much‚ much better than this.”

Masutha added: “I’m over the moon.

"It’s been an unbelievable turnaround of the season wherein we started with less hope‚ but the effort that these boys have put in changed everything.

“We started to believe and here we are now in the PSL.”

Newly promoted Highlands Park have opted to start their pre-season training at least a fortnight before the next club in order to be ready for their ...
Sport
4 years ago

Whoever was responsible for the cringeworthy Premier Soccer League (PSL) end-of-season awards at the Sandton Convention Centre should be tied and ...
Sport
4 years ago

The Premier Soccer League awards will be handed out on Tuesday night‚ honouring those players‚ coaches and match officials who excelled in the ...
Sport
4 years ago