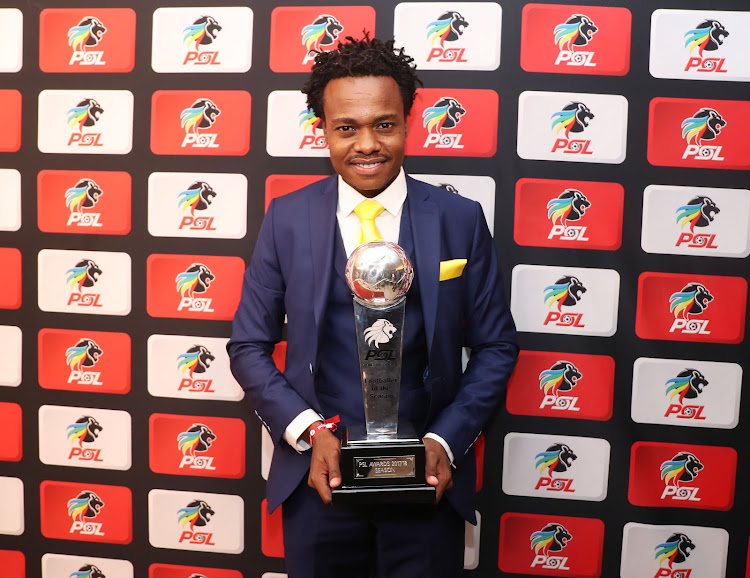 South Africa's Footballer of the Year winner Percy Tau pose for photographs with his trophy at the PSL Awards ceremony in Sandton on May 29 2018. The Mamelodi Sundowns star walked away with three awards.
Image: Gavin Barker/BackpagePix

English newspaper The Argus confirmed Albion's interest in the PSL Footballer of the Season just days after Sundowns coach Pitso Mosimane told local media that Tau was a wanted man in England.

Talking about Tau’s possible move to the Premier League‚ Mosimane said the English clubs should not think that “we are in Burundi”.

English Premier League sides have joined a long list of suitors that are bidding for South African Footballer of the Year Percy Tau‚ his Mamelodi ...
Sport
4 years ago

“Those teams must take us seriously if they need Percy.

"We are sitting with requests for Percy and we will have to find a way to replace him if he goes‚” said Mosimane.

“The Argus can confirm the Seagulls (Albion) are tracking Mamelodi Sundowns forward Percy Tau‚ who was recently named top man in his domestic competition‚” the newspaper reported.

Albion‚ a 116-year-old club based in the city of Brighton and Hove‚ East Sussex‚ England‚ made their debut in the Premiership last season and finished 15th on the log.

After winning the Footballer of the Season‚ Player’s Player of the Season and joint Top Scorer awards at the PSL Awards last month‚ Tau indicated he would prefer to ply his trade in the Spanish La Liga if a move overseas materialises.

Ajax Cape Town hope to force a replay of the Premier Soccer League Promotion/Relegation Play-offs this week when they return to the South Gauteng ...
Sport
4 years ago