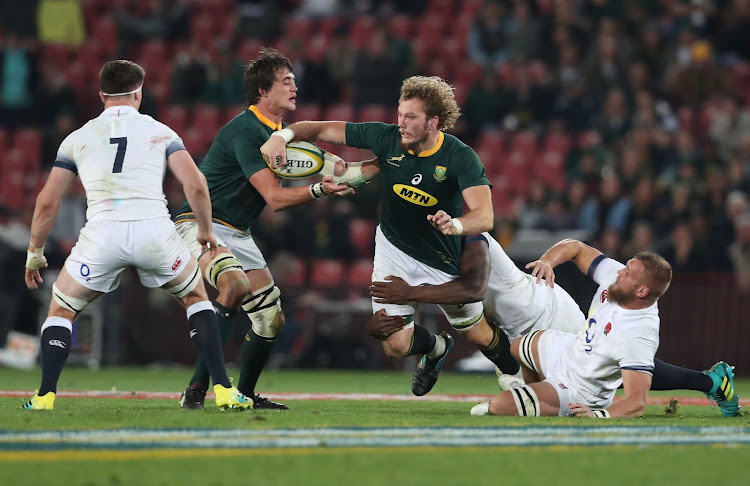 RG Snyman hands ball off to Rudolph RG Snyman of South Africa goes into tackle with Brad Shields of England during the international rugby match between South Africa and England at Ellis Park, Johannesburg on June 9 2018.
Image: Gavin Barker/BackpagePix

England coach Eddie Jones resisted the temptation to make wholesale changes to his team for Saturday’s second Test against the Springboks in Bloemfontein‚ naming just two changes to the starting lineup.

New Zealander Brad Shields‚ who qualifies for England through his parents‚ starts at flank place of veteran Chris Robshaw while lock Joe Launchbury returns after injury.

The 20-year-old Nick Isiekwe‚ who was substituted after 36 minutes in the first Test‚ has been axed to accommodate Launchbury.

Robshaw falls out of the squad altogether while mercurial flyhalf Danny Cipriani is on the bench for his first taste of Test action since 2015.

“Based on South Africa’s likely selection of an extra line-out jumper‚ we’ve decided to start with Brad Shields which improves our line-out‚” Jones said.

“It’s tough on Chris Robshaw‚ who has been an outstanding player for us‚ but I know he’ll bounce back.

“Danny Cipriani will come on to the bench‚ we’re looking for something a little bit different which he can bring.

“He’s been training well and doing everything that’s asked of him. Bloemfontein is a very fast ground at altitude.

"It has an average of 60 points per Test match so we are anticipating an ebb-and-flow type game like we had in Johannesburg.

“We have come here to win the series against South Africa and the squad is ready to go out and beat them this weekend.

"We have had a very good preparation this week and the intensity and executions in those sessions are going to put us in a good position for Saturday.”

England gave up a 24-3 lead after 20 minutes to lose 42-39 against the Springboks at Ellis Park in the first Test last Saturday.

Jones acknowledged the Boks performance but also believed that his side let them get out of jail‚ as he put it‚ and that there wouldn’t be a repeat this weekend.

Shields made his debut off the bench last week and will have a chance to prove his worth from the outset this Saturday where he will clash with some familiar faces from Super Rugby.