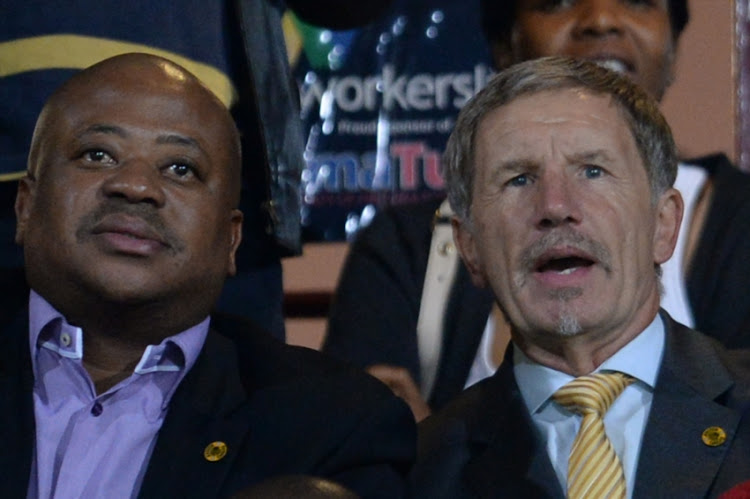 Bobby Motaung and Stuart Baxter during the Absa Premiership match between University of Pretoria and Kaizer Chiefs at Tuks Stadium on April 14, 2015 in Pretoria, South Africa.
Image: Lefty Shivambu/Gallo Images

Is Bafana Bafana coach Stuart Baxter leaving his post at the national team to return to Kaizer Chiefs?

Already Chiefs have confirmed on heated source of speculation this week‚ confirming the signing on Friday of Khama Billiat.

As Amakhosi’s deadline approaches of Monday to announce a new coach to replace Steve Komphela‚ who stepped down in April‚ speculation has reached fever pitch‚ and Baxter’s name has increasingly been put forward as the leading candidate.

One source close to Baxter‚ also a Safa insider‚ who did not want to be named‚ said they had heard the coach would return to Chiefs.

“I heard the same thing‚” they said. “But I am not sure if he has signed a contract yet.”

Baxter’s agent‚ Steve Kapeluschnik‚ denied having had any talks with Chiefs on behalf of his client‚ who is on holiday in Sweden‚ but also added that in football “things change quickly”.

Kaizer Chiefs have confirmed the signing of Khama Billiat from Mamelodi Sundowns.
Sport
3 years ago

“I would have to deny that‚” Kapeluschnik told TimesLIVE on Friday‚ asked if there was any truth Baxter could move back to Chiefs.

“I mean I haven’t spoken to any clubs about Stuart. And I had a long conversation with him – he was in Sweden – yesterday.”

Kapeluschnik said Baxter comes back from his holiday “I think in the middle of July”.

“But I haven’t spoken to Chiefs. I really haven’t‚” he said.

“But honestly I haven’t met anybody or spoken to anybody and that’s where it is.”

South African Football Association (Safa) communications manager Dominic Chimhavi was stunned when contacted for comment on Friday and said the association were puzzled by the furious speculation around Baxter's future.

“Stuart Baxter has a standing contract with Safa and we do not believe that he would go behind out backs and communicate with someone else. This is all very puzzling‚” Chimhavi said.

Stuart Baxter is one of the best Bafana Bafana coaches Steven Pienaar worked with‚ the former Everton midfielder has said.
Sport
3 years ago

A move for Baxter from Bafana back to Chiefs might suit all parties.

Baxter has faced increasing media noise and public skepticism since Bafana’s failure last year to qualify for the current World Cup in Russia‚ losing twice against Cape Verde and Senegal as SA finished bottom of their group.

If there were concerns at Safa that a bizarrely lengthy five-year deal with the Brit had been a mistake‚ then releasing the coach back to Chiefs‚ who might even have to pay a sum to the association towards settling the contract‚ could be a golden ticket exit plan.

Chiefs have not won a trophy since Baxter’s departure after the 2014-15 season‚ where the coach had brought the club their second league and cup double in three years.

Amakhosi have apparently struggled to find a suitable‚ and affordable‚ replacement for Komphela‚ seeing an expensive candidate such as Patrice Carteron opting for Egyptian giants Al Ahly instead.

Baxter’s son‚ Lee Baxter‚ who the coach has worked with at various clubs‚ is goalkeeper-coach at Chiefs.

When Baxter joined Bafana the coach wanted to bring Lee Baxter into Bafana‚ which was too controversial a move at national level‚ but acceptable at a club.

The coach did not finish his contracts at Chiefs or SuperSport United‚ who he left to join Bafana in May last year.