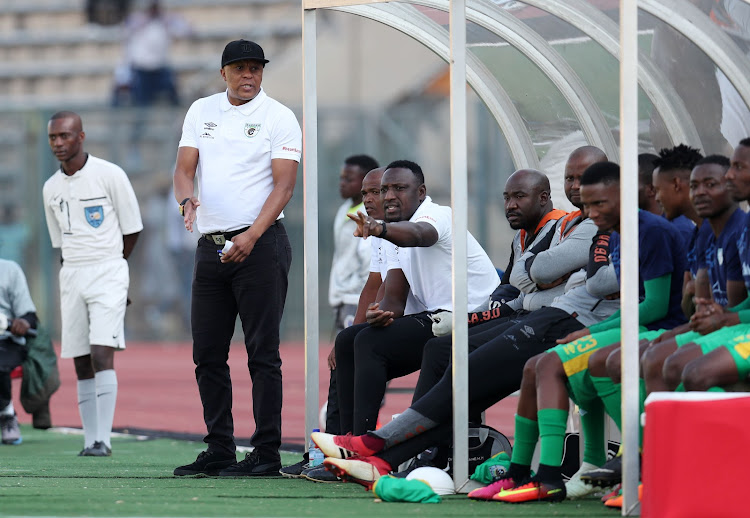 Baroka FC technical director Doctor Khumalo reacts on the bench during an Absa Premiership match against SuperSport United on May 12 2018. Khumalo says he will decide after the ongoing FIFA Russia World Cup if he is going back to the Limpopo based club.
Image: Muzi Ntombela/BackpagePi

Doctor Khumalo is heading for the Baroka FC exit door.

The Kaizer Chiefs and Bafana Bafana legend has not returned to Limpopo for pre-season and insiders have said his days are numbered at the club.

Baroka‚ who escaped relegation on the final day of last season‚ returned to pre-season last week and the players underwent fitness tests under the watchful eye of assistant coach Fannie Mthethwa.

New Baroka FC coach Wedson Nyirenda has explained his football philosophy as he starts his new job in Limpopo.
Sport
3 years ago

Khumalo‚ who took charge of Baroka’s last two league matches of last season where they managed to avoid the dreaded play-offs and relegation‚ said on Tuesday morning he would reveal his future plans in the coming days.

“I am busy with other things at the moment but I will let people know if I am going back to Baroka or not at a later stage‚” he said without taking further questions.

Asked for clarity‚ Baroka chief executive Morgan Mammila said they would be sitting down with Khumalo after his World Cup commitments to map a way forward.

“He is currently busy with the World Cup but we will sit down with him after the tournament to sort out the issue of his future‚” said Mammila.

The transfer window only officially opens on July 1‚ but there have already been some intriguing moves announced by Premier Soccer League clubs ahead ...
Sport
3 years ago

Nyirenda said he would not have a problem working with his former Chiefs team-mate Khumalo because they know each other very well.

“I found Doc here at the club (Baroka) and I won’t have a problem working with him‚" he said.

"I have known him for a long time while we were players at Chiefs and we have helped each other along the way as coaches‚” said Nyirenda‚ adding that pre-season is going well.

“Today (Tuesday) will be my second session with the players at training and we will be working hard to ensure that they are ready for the coming season.”

Lamontville Golden Arrows remain on the hunt for a striker and a pair of fullbacks as they prepare for the new Premier Soccer League season.
Sport
3 years ago

Allan Campbell‚ one of the candidates for three vacancies at the Independent Electoral Commission‚ on Monday explained his relationship with current ...
Politics
3 years ago

Khumalo was appointed Baroka’s technical director almost a year ago to much fanfare where he worked with former coach Kgoloko Thobejane who has since left the club for disciplinary reasons.

Speculation is rife that “16V”‚ as Khumalo is known‚ is being lined up for a spectacular return to Naturena where he will be working with whoever is going to be their new coach to replace fired Steve Komphela in the coming season.