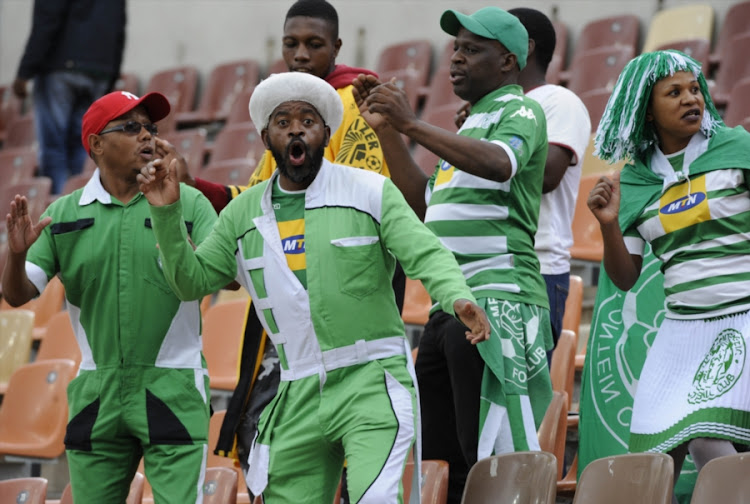 Bloemfontein Celtic fans are appealing with club chairman and owner Max Tshabalala not to sell the 49-year-old club to business people outside of Bloemfontein. The club has been put up for sale.
Image: Philip Maeta/Gallo Images

Ajax Cape Town are believed to be in talks with Bloemfontein Celtic in a bid to convince the Free State club's owner Max Tshabalala to agree to a deal that would see the two sides swap their Absa Premiership statuses.

Ajax‚ who are threatening to interdict the start of the coming Premier Soccer League (PSL) season‚ are working on this move as their safety net in case they lose their bid to remain in the League next season in the aftermath of the long-running Tendai Ndoro eligibility saga.

Judge Denise Fisher gave Ajax a lifeline last week by directing the matter to Fifa as the only body that can rule on Ndoro’s matter‚ but the PSL indicated later that they intend to appeal the decision.

The Premier Soccer League (PSL) intends to appeal the court decision that has thrown the start of the coming Premiership season into serious doubt ...
Sport
3 years ago

Insiders said if Ajax fail in their bid to stay in the topflight‚ the Cape side could buy Celtic's status and relocate the club to the Mother City.

Celtic‚ on the other hand‚ would assume Ajax's status in the National First Division (NFD).

“It is true that Ajax bosses have been in contact with Bra Max (Tshabalala) in Bloemfontein with this offer of swapping their PSL statuses‚” the insider said.

"Obviously they are not sure whether they will ultimately win their case (the long-running Ndoro eligibility saga) through the courts or at Fifa and stay in the PSL.

"So they have devised a Plan B that could see a swap of the two clubs' statuses."

Ajax Cape Town have effectively been restored to 15th position in the Absa Premiership after their bid to set aside the ruling for arbiter Advocate ...
Sport
3 years ago

Another high ranking informant in Cape Town added that the Ajax bosses are proposing a plan that would see Celtic drop down to the NFD with their players and allow the Urban Warriors to remain in the PSL with their players.

But this move is likely to be met with resistance by the Celtic players.

“From my understanding of things‚ Ajax only wants the status of Celtic and this means the players will be left in limbo.

"I am not sure how far they have gone with the negotiations but this may prove to be a problem if any deal is agreed between the two sides‚” the informant in Cape Town said.

Celtic remains on sale as they do not have a sponsor and they failed to pay salaries of some of their players on time last month‚ leading to a meeting between the South African Player’s Union and the players last weekend.

Tshabalala and Ajax chief executive Ari Efstathiou could not be reached for comment on Tuesday as they did not answer their mobile phones.