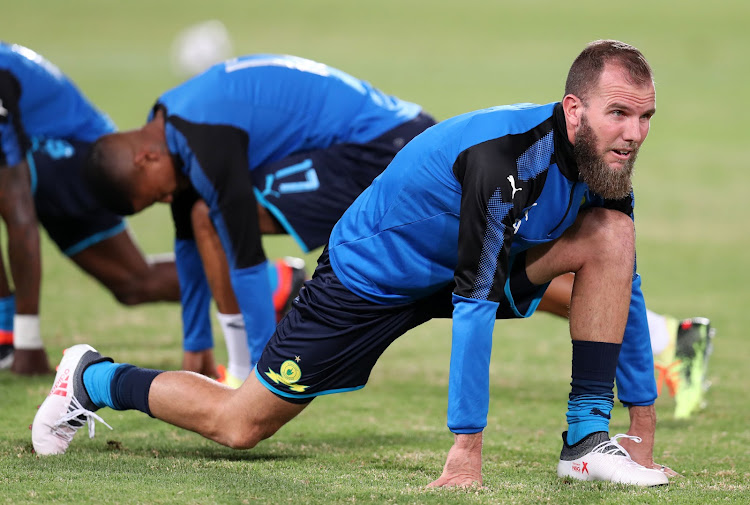 Mamelodi Sundowns' striker Jeremy Brockie is yet to fire for Mamelodi Sundowns since his move from rivals SuperSport United and will hope to get on the score sheet when Sundowns return to the Caf Champions League group stages duty on Tuesday July 17 2018 in Lome, Togo.
Image: Muzi Ntombela/BackpagePix

Mamelodi Sundowns will be hoping for a return to goal-scoring form for New Zealand striker Jeremy Brockie‚ whose drought in the opposition box is nearing nine months and 26 games for club and country.

With new signings Jose Ali Meza and Toni Silva unavailable‚ Percy Tau not training with the side‚ Gaston Sirino suspended and Khama Billiat having departed for Kaizer Chiefs‚ Sundowns coach Pitso Mosimane has seen his forward options limited for the trip to AS Togo-Port in their Caf Champions League clash in Lome on Tuesday.

The experienced Brockie‚ who was part of the SuperSport United side that made the Caf Confederation Cup final last year‚ is therefore a likely starter along with Sibusiso Vilakazi and Themba Zwane in a front three.

Brockie’s last goal was for SuperSport on October 28 against Bloemfontein Celtic in the Telkom Knockout‚ since then he has gone 26 appearances for Matsatsantsa‚ new club Sundowns and the New Zealand national team without finding the back of the net.

It is an extraordinary statistic when viewed against his record prior to that‚ where he had been comfortably the most lethal forward in South Africa across all competitions.

Up to the start of his barren run‚ Brockie had netted 55 goals in 117 appearances for SuperSport‚ an outstanding achievement that left him just two shy of the club record set by the late Abram Raselemane.

Back to harsh reality for Croatia after stellar World Cup run

It was a dream run that came agonisingly close to being crowned with a World Cup title but for Croatia now comes a return to a harsh soccer reality ...
Sport
3 years ago

He was also the leading marksman in the 2017 Confederation Cup with 10 goals‚ which led to a nomination for African-based Player of the Year by the Confederation of African Football (CAF) before they scrapped the award.

"I've had droughts before‚ every striker goes through difficult periods in terms of hitting the back of the net and you've just got to stay calm and composed.

"You can't let it get to you because if you do‚ there is no chance that it will come‚” Brockie told reporters previously.

"I'll just keep getting into the right areas and keep trying to hit the target. You've just got to stay positive. I'm still confident in my own ability to be able to score goals.

France overwhelmed Croatia 4-2 in the World Cup final at Moscow's Luzhniki stadium on Sunday to lift the trophy for the second time in 20 years.
Sport
3 years ago

Rivals Kaizer Chiefs and Orlando Pirates unveiled their new jerseys within minutes of each other on Monday morning in perhaps the strongest hint of ...
Sport
3 years ago

“I know that as part of a striker's duties you are going to miss chances and then you going to score one that probably you've charged down a defender‚ it hits you in the face and goes in the back of the net.”

Certainly a goal on Tuesday would be a massive boost for both Brockie and Mosimane‚ who is likely to need all the firepower up front he can get in what is a congested Premier Soccer League and CAF club competition season.