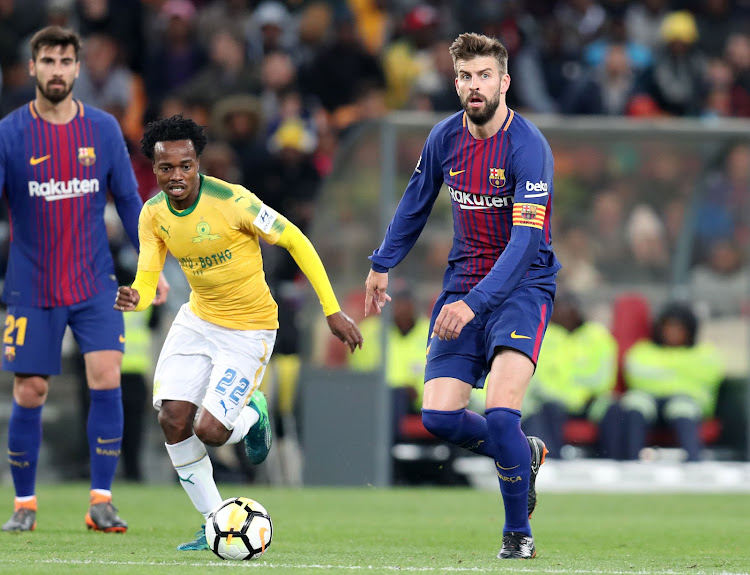 Percy Tau is on the verge of concluding personal terms with Brighton and Hove Albion but the deal between South African champions Mamelodi Sundowns and the English Premier League club has been concluded‚ ending a drawn out five-month transfer saga.

The 24-year-old from Witbank‚ named the best player in the Premier Soccer League last season‚ has earned in the region of R50-million for Sundowns and in the process became the most expensive South African footballer in a major windfall for the ‘Brazilians’.

TimesLIVE has been told the total value of the deal is 3‚1-million pounds‚ which includes bonus payments for targets achieved‚ like when Tau has played a certain number of games.

Sundowns will also receive 10 percent of any deal Brighton might strike for Tau in the future.

EXCLUSIVE: We reveal the latest developments in the drawn out Percy Tau transfer

Percy Tau will sign for Brighton and Hove Albion on Thursday in a deal worth more than R50-million but will not be playing for the English Premier ...
Sport
3 years ago

The formal announcement of his signing by Brighton had been expected on Thursday and was planned to be made on the club’s website (www.brightonandhovealbion.com) and on their twitter feed (@OfficialBHAFC).

But with the negotiations over his contract and salary still being finalised‚ that announcement could be held over until Friday.

It is still not known how long Tau has signed for but he will be loaned out this season in order to gain more experience.

Tau’s late arrival for the pre-season preparations at Brighton‚ because of the drawn out transfer saga‚ is one of the factors that has led to a decision that he needs time to settle into football in Europe before he can be thrown into the Premier League‚ club sources said on Thursday.

Ajax Cape Town CEO Ari Efstathiou says the club have been left in limbo ahead of the new 2018/19 season‚ unsure what type of player they need for the ...
Sport
3 years ago

It also gets around the potential rejection of a work permit application‚ because he has too few international caps and also because South Africa’s FIFA ranking is too low.

The immediate destination for Tau is to be decided in the next days‚ sources added.

Tau completed his medical at the club on Wednesday.

It has taken since March to get the deal done and been a matter of much frustration to the English club‚ who have told TimesLIVE they were not impressed with the negotiating ability of Sundowns.

It was only after Sundowns were criticised for failing to deliver on their promise to Tau to let him go overseas if there was interest‚ that stalled negotiations were kicked started again.

New Kaizer Chiefs coach Giovanni Solinas has begun to familiarise himself with his surroundings at the club's Naturena headquarters as he awaits his ...
Sport
3 years ago

Sundowns released a statement saying owner Patrice Motsepe had instructed the club to move negotiations along‚ looking to paint Motsepe in a positive light and put the blame on club officials.

But TimesLIVE has learnt that the negotiations were not handled by Sundowns management but rather senior lieutenants in Motsepe’s business and that the billionaire was well aware of what was going on throughout the drawn-out saga.

The image of Motsepe suddenly instructing his club to conclude the Tau deal‚ arriving like a white knight to ‘rescue’ the situation and ‘put Tau out of misery’ is therefore disingenuous.

Fans have still not shown great interest in the pre-season match involving Kaizer Chiefs and Mamelodi Sundowns at FNB Stadium on Saturday with less ...
Sport
3 years ago

Tau had refused to join Sundowns’ pre-season preparations in order to force their hand.

Tau will be the 10th new signing before the start of the season for ambitious Brighton‚ including Mali international Yves Bissouma from Lille in France on a five-year deal‚ Morocco’s Soufyan Ahannach from Sparta Rotterdam and Nigeria centre back Leon Balogun.

In Tau’s position‚ Brighton spent 5.4-million pounds (some R94-million) on 25-year-old Florin Andone‚ whom is a centre forward from Romania but had been playing in La Liga in Spain.