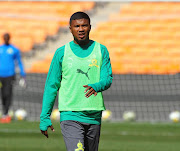 At left-back Lakay will compete with‚ and add depth to‚ another player Mosimane converted from a winger to a full-back‚ Bafana Bafana left-back Tebogo Langerman.

Lakay will be looking to impress for his new club if he can get a run in Saturday’s Shell Helix Ultra Cup preseason friendly against Kaizer Chiefs at FNB Stadium.

“Pitso explained to me the reasons he wanted me to come here‚” Lakay said.

“He told me that he wants to use me as a left-back because I have got the engine. I am comfortable with playing in that position because in the modern game fullbacks are sometimes more offensive than defensive.

“My main aim is to break into the starting XI and be consistent in the coming season.”

Chiefs have a new coach in Giovanni Solinas‚ who has been involved in Amakhosi’s training sessions since his appointment last Friday while the 50-year-old Italian awaits his work permit to arrive.

“I don’t think Chiefs will be too different to how they played under Steve Komphela last season but we will see how it goes on Saturday‚” Lakay said.

Lakay said he hopes the move to Sundowns will enhance his chances of moving overseas to follow in the footsteps of France-badsed Bongani Zungu‚ Keagan Dolly and new Brighton and Hove Albion signing Percy Tau.

“Hopefully this move is a springboard for me to go overseas because over the past few years players like Zungu‚ Dolly and now Tau have moved overseas from Sundowns. I hope it will be the same with me‚” he said.

Lakay said that City coach Benni McCarthy had given him his blessings on his move to Chloorkop‚ where the player said he aims to compete for continental trophies.

“I have played in Caf club competitions before with SuperSport United and Cape Town City‚ I want to compete for bigger things out of the country. Sundowns want to win in Africa and go back to the Club World Cup.

“I want to give credit coach Benni because he encouraged me to believe in myself when at times I doubted myself. If remember correctly that was when we just returned from the January break [last season]‚ and from there everything changed for the better.

“He told me to continue to work hard and wished me luck.”