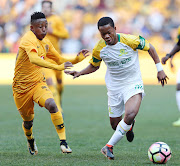 Few players in South African football divide opinion like Kaizer Chiefs midfielder Hendrick Ekstein but the 27-year old says he does not have time for those who doubt his abilities.

Ekstein has been at Chiefs for four years but the attacking midfielder's many critics insist that he has no business donning the club's famous colours.

But the man himself remains unfazed and he says he is continuing to work on his personal development‚ and to help the club win silverware.

“I don’t respond to people who doubt me‚” he said. “The only thing that I focus on is playing football. Chiefs is a big club and it is not about me but the team.

"If the team is not doing well‚ there will always be doubts about everyone. But like I said it is not about me‚ but about the team.”

Asked if he was happy with the progress he has made since he joined the club in 2014‚ Ekstein gave a honest assessment and said things could be better.

“I can’t say I am happy with the progress I have made since joining Chiefs‚" he said.

"I have only won two trophies in the form of the MTN8 and the league‚ but I didn’t contribute much to that success because I was not playing regularly.

“I want to contribute more so that the team could win more trophies because this is the team that I grew up supporting.

"My target is to contribute more as a number ten with assists and even goals and I have worked very hard at training during pre-season.

“Last season we didn’t click and we did not win anything. We want to change things this coming season.

"Whatever happened over the past three seasons where we did not win anything is in the past and we promise our supporters that we will win something for them because this is big team.

"They must expect more assists‚ more goals from me and as a team we are working hard and we have set goals for the coming season.”

Those who believe in his talents have likened Ekstein’s attacking play and his tricks to those of legendary Chiefs midfielder Patrick “Ace” Ntsolengoe.

But he does not play too much attention to the comparison.

“I am not going to put myself under pressure with the names that the fans give me‚" he said.

"I did not give myself that nickname or any other‚ my job is to play to play to the best of my ability and help the team to win football matches.”