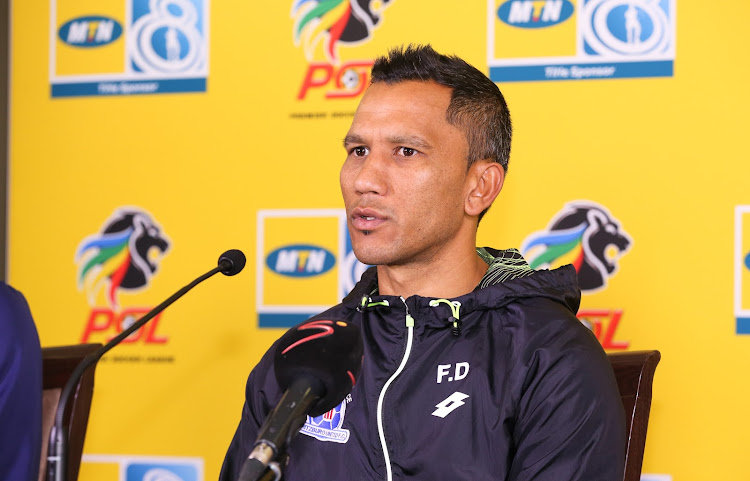 A club with as compact a squad as Maritzburg United possess have been left reeling somewhat by the loss this season of stars Lebohang Maboe and Bevan Fransman‚ United coach Fadlu Davids has admitted.

For United‚ centreback Fransman’s move to Highlands Park and playmaker Maboe being poached by Mamelodi Sundowns follows the loss six months ago of Evans Rusike to SuperSport United.

Davids pointed out‚ ahead of United seeking for their first win of the 2018-19 Absa Premiership season against Kaizer Chiefs at Harry Gwala Stadium on Friday night‚ that for a team with a compact squad‚ the blows have been felt harder.

“You have to look at it objectively‚” United’s coach said.

“Throughout last season we played with the same 13 or 14 players. You could know which subs we were going to make‚ you could know our starting lineup.

“So really losing Lebo and Bevan is a huge loss. I think they missed two games combined throughout last season.

“It’s a huge loss. It’s a new era‚ with people coming in.

“That’s why we have signed a few players. We know it’s too early for them to just come in and start making an impact.

“They need time‚ and we need to adjust the way we play slightly to accommodate the new players.

“And our style will evolve to accommodate the new players. And we’ll figure out a new attacking structure and a new defensive structure to be able to again be functional like we were last season.”

Much is expected from Maritzburg following last season’s breakthrough highest fourth-placed PSL finish and a first cup final in the Nedbank Cup.

They have managed to keep the core of their squad together apart from the loss of Maboe and Fransman.

But given the small resources Davids works with‚ perhaps expectations should not be too high of a repeat of last campaign.

United started 2018-19 with two defeats in the league‚ 2-0 at home against Lamontville Golden Arrows and 2-1 away against Free State Stars.

They then lost a third straight match‚ 1-0 against Cape Town City in MTN8 quarterfinals on Sunday.