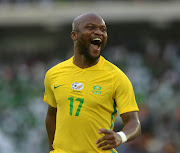 Tokelo Rantie had his first training session with Cape Town City on Wednesday‚ the culmination of a six-month pursuit by club owner John Comitis for the Bafana Bafana star‚ who could feature in the team’s next fixture against Kaizer Chiefs.

City announced Rantie’s capture last week as they seek to solve a goal-scoring issue within the side that has plagued them for the past 12 months‚ with the player not having featured competitively since he left Turkish side Gençlerbirliği last October.

TimesLIVE understands that personal issues have been at the heart of his absence from the pitch‚ while at one stage he contemplated a move to the Free State to take up farming.

“He needed a refresh with his life and our club probably is the best fit for him‚ something that he has come to realise since we first spoke six months ago‚” Comitis tells TimesLIVE.

“It is good for him to move to a new city‚ to get away from where his personal matters have been and we are a club that wants to see him get back on his feet and return to his best form.”

Comitis says his coach Benni McCarthy‚ a strike-partner of Rantie at Orlando Pirates in their successful 2011/12 season‚ had pushed hard for the move.

“Benni made it clear to me that if we want to land a striker to solve our scoring woes‚ then Rantie was the one‚ so I have persevered with that for six months and finally we have him here.

“It is certainly not something that happened last minute‚ even if it looks like that. I also said to Tokelo that I was not interested in a one-season deal with him.

“I am trying to build a club with a vision for the future and have a responsibility to the people of Cape Town‚ so he must want to be part of that.

“He was very enthusiastic about buying into what we are looking to achieve at City in the long-term and that is why he has signed a three-year deal.”

Comitis hopes to have Rantie involved in City’s next Absa Premiership fixture against Kaizer Chiefs on September 15‚ but admits it will take some time to get him match fit after almost a year without playing.

“Realistically we are probably looking at four weeks to get him fully match-fit‚ but we are really hopeful that he will be involved in some way against Chiefs.

"That is obviously down to the coach and his thinking‚ but we are working towards that.”